2017 was marked by Lek’s successful operations. Based on their knowledge and experience, Lek accomplished their mission to discover new ways to improve and extend people’s lives by pioneering new approaches to help people around the world access high-quality healthcare.

Highlights and milestones of Lek’s operations in 2017:

Novartis is the leading provider of medicines in Slovenia, where Lek, Novartis Pharma Services and Sandoz, operate. Together we are building and maintaining the reputation of a dynamic, ethical, and trusted pharmaceutical company. Lek develops, manufactures, and markets effective, safe, and high quality medicines and active pharmaceutical ingredients. With our knowledge, quality, and experience we have gained an important role in Novartis' organizational structure, especially in the Novartis Technical Operations, Global Drug Development, Novartis Business Services, and the generic division Sandoz. We are the leading Sandoz development center, and one of the key development sites for technologically complex projects. We invest a great deal in the development, education, and training of our employees. Novartis invested in Slovenia more than EUR 2 billion since 2003. More than half of this investment has been devoted to development, and the rest to modernize and expand our production capacities.

Sandoz is a global leader in generic and biosimilar pharmaceuticals. As a division of the Novartis Group, our purpose is to discover new ways to improve and extend people’s lives. We contribute to society’s ability to support growing healthcare needs by pioneering novel approaches to help people around the world access high-quality medicine. Our portfolio of approximately 1000 molecules, covering all major therapeutic areas, accounted for 2016 sales of USD 10.1 billion. In 2016, our products reached more than 500 million patients and we aspire to reach one billion. Sandoz is headquartered in Holzkirchen, in Germany’s Greater Munich area.
Sandoz is on Twitter. Sign up to follow @Sandoz_global at http://twitter.com/Sandoz_Global (link is external).

Novartis provides innovative healthcare solutions that address the evolving needs of patients and societies. Headquartered in Basel, Switzerland, Novartis offers a diversified portfolio to best meet these needs: innovative medicines, cost-saving generic and biosimilar pharmaceuticals and eye care. Novartis has leading positions globally in each of these areas. In 2016, the Group achieved net sales of USD 48.5 billion, while R&D throughout the Group amounted to approximately USD 9.0 billion. Novartis Group companies employ approximately 121,000 full-time-equivalent associates. Novartis products are sold in approximately 155 countries around the world. For more information, please visit http://www.novartis.com. 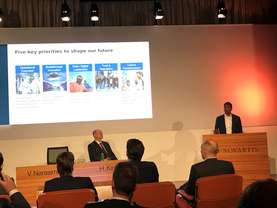