Today, the Mengeš site of Lek, a Sandoz company, opened its door to local residents. With the development of research and production activities, the Mengeš site has strengthened enormously in recent years and has become one of the key components of the global pharmaceutical company Sandoz, gaining also an increasingly important role within the Novartis group. In Mengeš, the company is also expanding environmental investments, which further reduce the impact of its operations on the environment.

The Mengeš site of Lek, a Sandoz company, has been continuously growing and developing for 70 years. It is a development and production center of Sandoz, responsible for complex active ingredients and biosimilars that are sold around the world. In total, more than 900 associates work at Mengeš and as many as 40 percent come from the region (Domžale, Kamnik, Mengeš, Trzin). This places Lek among the major employers in the region.

»The Mengeš site consists of two key units: development and manufacture of active ingredients and development and manufacture of biosimilars. A minor part of the production is still based on plant extracts; finished products (probiotics) are also manufactured. In addition, the Mengeš site also features quality control and support operations such as maintenance and energy generation, warehousing and logistics, the department for health, safety end environment management, and the fire service,« explained Egidij Capuder, Head Production of Pharmaceutical Ingredients Mengeš.

Biopharmaceuticals Mengeš – the only industrial center for modern biotechnology in Slovenia

Biopharmaceutics is the latest and the fastest growing segment of the pharmaceutical industry offering new options for the treatment of a number of complex diseases. Biopharmaceuticals Mengeš, which is a key part of Sandoz Novartis biopharmaceuticals, employs more than 350 experts. 80 percent of those have a university degree or higher, as many as 34 percent hold a master’s degree or a doctorate in science.

Enhancing cooperation with the local community

The operation of Lek, a Sandoz company, is based on a long-term strategy that includes socially responsible activities in all areas of operation, including active engagement in the local community. For many years, Lek, a Sandoz company, has been supporting different associations and organizations in the local community both in Mengeš as well as across the region, including the Mengeš Home for the Elderly, the Sožitje Mengeš Association, CIRIUS Kamnik and nearby voluntary fire-fighting associations (Mengeš, Topole, Loka pri Mengšu, Homec, Jarše), primary school and kindergarten programs (Mengeš, Preserje pri Radomljah, Roje, Mengeš Kindergarten, Rudolf Maister Education Center). Every year, Lek’s voluntary fire fighters participate in the Fire Prevention Month, and every year the associates take part in the Community Partnership Day dedicating their time to help people from the local environment – in Mengeš they usually visit the Home for the Elderly and organize a fun day for the students of the Roje Primary School.

With regard to environmental performance, the fundamental approach of Sandoz is to prevent all types of pollution. They minimize the environmental, health and safety risks that could affect the environment, employees and the local population. The Mengeš site continuously invests in advanced environmental technologies and implementation of environmental policy and continues to pursue the company’s key environmental objectives. In doing so, it complies with the statutory provisions, as a minimum, and in particular develops good environmental practice.

In the last few years they:

For environmental investments Lek, a Sandoz company, dedicated in total 2.9 million Euros in 2014.

You can read more on this in the Sustainability report 2014 – Lek d.d. on Lek website here.

Lek, a Sandoz company, is one of the key pillars of the second-largest generic pharmaceutical company globally. Its role within Sandoz is to act as: a leading global development center for technologically demanding products and technologies; a key global manufacturing center for active pharmaceutical ingredients and medicines; a competence center for the development of vertically integrated products; a Sandoz competence center in the field of development and manufacturing of biosimilar active ingredients and products; a supply center for the markets of Central and Eastern Europe (CEE), South East Europe (SEE) and the Commonwealth of Independent States (CIS), and is responsible for marketing and sales of Sandoz products on the Slovenian market. For further information, please visit http://www.lek.si/en.

Sandoz, a Novartis company, is a global leader in generic pharmaceuticals and biosimilars, driving sustainable access to high-quality healthcare. Sandoz supplies a broad range of affordable, primarily off-patent products to patients and customers around the globe. The Sandoz portfolio comprises approximately 1,100 molecules, which accounted for 2015 sales of USD 9.2 billion. Sandoz is headquartered in Holzkirchen, in Germany’s Greater Munich area. The company holds leading global positions in biosimilars as well as in generic anti-infectives, ophthalmics and transplantation medicines. 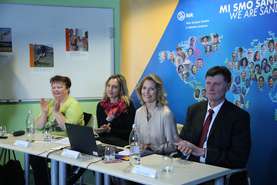 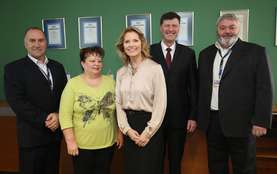 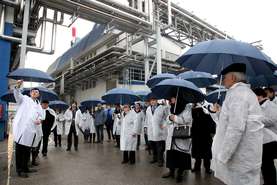