On the occasion of the 10th Innovation Day, the Chamber of Commerce and Industry of Slovenia (CCIS) awarded most innovative companies and best innovators in year 2011. Among 230 participating innovations, Lek Pharmaceuticals, a Sandoz company, received the highest acknowledgement – the Gold Innovation Award. The award was presented to Dr Ivana Gazić Smilović, expert researcher at the Department of Organic Synthesis, and Dr Zdenko Časar, global Head of API Portfolio Management at Sandoz, for the development of a new method for preparation of active ingredient for treatment of plasma cell cancer.

»The Golden Innovation Award presented by the CCIS for best innovations in 2011 is the best possible conclusion to the many stages of development with regard to the innovation, that Ivana and I managed to realise in the synthesis of active ingredient bortezomib. The innovation is protected by two patent applications for which we used the most advanced knowledge and in certain segments shifted the limits of science a few steps further into the future. This is also supported by the fact that the key part of the invention was published in the prestigious science publication Angewandte Chemie. In a short period of time, we received international acknowledgement for this achievement in scientific circles; in the form of a selected summary it was also published in some renowned international magazines such as the February issue of Chemistry & Industry and the April and September issue of Synfacts. CCIS conferred only seven golden Awards among 45 nominees at national level, therefore increasing the importance of this recognition even more, as other awardees also presented truly remarkable innovations. The award itself is also proof that Lek nurtures the right environment for the development of an innovation culture at the highest possible level, which is a good incentive for young talented researchers,« said Dr Zdenko Časar upon receiving the award.

Ivana Gazić Smilović added: »I am very proud that our invention was awarded with the Golden Innovation Award 2011 amongst a highly competitive field of 45 top inventions. This is a tremendous acknowledgement for our hard work, efforts, and successful solving of research issues. I am glad to work in a company such as Lek, which strongly supports development in the realisation of new ideas. The Golden Innovation Award 2011 proves this. It is great to be a part of this story.«

A gathering of innovators and representatives of the most innovative companies were first addressed by the President of the Republic of Slovenia, Danilo Türk, who highlighted, that Slovenia is among the best in the field of innovation, and that it also has some good organisational models which enable innovations to be introduced into industry and practice. However, it is important to take innovation into consideration not only with regard to technical developments, but also in business models, social organisation, politics and a strengthening legislative framework in order to allow society to develop in a sound, timely and comprehensive manner. In such a manner, complete innovation throughout society could be achieved, for which, said President Türk, some changes would be necessary, from the establishment of a different legal framework to the encouraging of greater innovation.

For the best 2011 innovations contest, the Chamber of Commerce and Industry received 230 innovation project submissions, in which 736 innovators took part. Seven gold innovation awards, 28 silver, six bronze and four diplomas were presented. For the first time, one of the best innovations was also chosen by the general public. Apart from Lek, the highest golden awards for innovative achievements were also presented to the CBS Institute, Trimo, Gorenje, Eti, Kovinoplastika Lož and Krka. 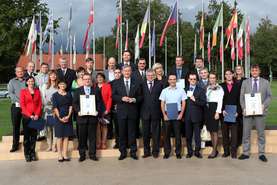 Photo for print
Innovators with the President of the Republic of Slovenia, Danilo Türk 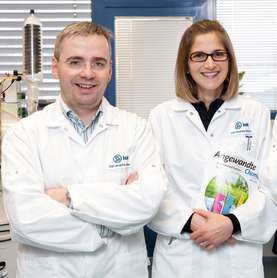