New investment will strengthen Sandoz Slovenia‘s role as an integral part of the company’s biosimilars development and production network.

Sandoz Biopharmaceuticals, the global leader in biosimilars, opened a new laboratory for cellular and molecular biology at its development Center in Mengeš, Slovenia. The laboratories will help Sandoz scientists at Mengeš strengthen their capabilities and further contribute to the fulfillment of Sandoz Biopharmaceuticals’ mission – to broaden patient access to advanced biological medicines. With this new investment, Novartis will have invested a total of nearly 54 million Euros in development, research and production of biopharmaceuticals in Slovenia, a clear demonstration of the company’s confidence in, and commitment to its Slovenian sites.

The Department for Cellular and Molecular biology in Mengeš plays a critical role in the development of mammalian cell lines for production of recombinant proteins and their genetic characterization. “Over the last several years, the biopharmaceuticals site in Mengeš site has been instrumental in driving Sandoz’s commercial success and in building its pipeline, said Dr Matjaž Oven, Head Biopharmaceuticals Mengeš. “The new cell and molecular biology facility will strengthen our ability to support the continued development of Sandoz’s industry-leading pipeline of biosimilars.”

Biologics are an increasingly indispensable part of modern medicine, but their high costs and increasing demand are impacting patient access. Biosimilars, pioneered by Sandoz, make these vital medicines accessible to more people as they offer comparable quality, safety and efficacy to their reference products, at a more affordable price. All three Sandoz biosimilars are also available to patients in Slovenia.

The introduction of biosimilars has already led to significant savings in the EU. The latest study by IGES Institute “Saving money in the European healthcare systems with biosimilars“1 showed that by 2020, eight countries in the European Union2 could save a cumulative total of between EUR 11.8 billion and 33.4 billion through the use of biosimilar medicines. 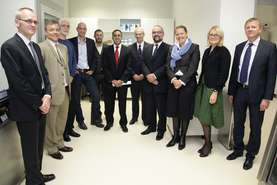 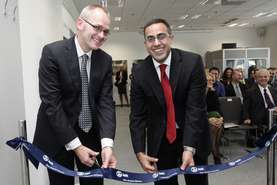