Manager of the Year 2012 is Vojmir Urlep, President of the Board of Management of Lek, a Sandoz company

The management board of the Managers Association selected Vojmir Urlep, President of the Board of Management of Lek, a Sandoz company, as Manager of the Year 2012. Recognition will be awarded to him at the Management Congress on Thursday, 27 September, in Portorož.

According to the opinion of the management board of the Managers Association, Lek, a Sandoz company, under the direction of Vojmir Urlep delivers above-average business results, above-average customer and employee satisfaction, high added value, and plays a leading role within the Sandoz Group. All these are excellent prospects for further global development of the oldest Slovenian pharmaceutical company.

From Lek he created the largest Sandoz development center

Vojmir Urlep, a double master degree holder– in pharmacy and economics, was first employed in Lek back in 1983. Throughout the following fifteen years he was leading the sales across the African region, led the representative office in Moscow, Lek Zagreb Company, in the period 1996-1998 he was a member of the Lek board of management and president of the Lek board of management. He left the company for seven years to take over the running of Kemofarmacija company, but returned in 2007 as president of the board of Lek management and currently also performs the function of Head of Novartis in Slovenia.

In the recent period of his leadership, Lek with its seven production sites and three development centers for difficult-to-make products (active pharmaceutical ingredients, final dosage forms and biosimilars) has become the largest Sandoz’ development center. In 2011, Lek’s products accounted for one quarter of all development projects and the most important products launched by Sandoz, which is the largest volume within this generic group. Filing on average 20 patent applications every year and having over 1,200 patent rights obtained around the world, Lek has made a significant contribution to Sandoz’ sales which increased by ten per cent last year.

With outstanding results and high investment in development

After 2008, Lek has transformed itself predominantly into a global development and production center for difficult-to-make technologies, and the majority of the sales take place within Sandoz Group on the principle of internal pricing. Lek shows excellent business results:

Transformation of Lek with a clear focus on development and production coincides with Vojmir Urlep taking up the position as the head of the company. In the period since he become a president of the board of management, the production volume in key areas has increased by 150 to more than 300 per cent, there has also been a growth in the number of development projects, especially in the proportion of technologically most demanding ones. Lek has gradually adapted to a different role within the international group and has been establishing an inclusive organisational culture. As a result of investments of 1.1 billion EUR since 2002, Lek is, with regard to technological equipment, one of the world leaders in the pharmaceutical industry. Lek is also present in currently most demanding field of development and production of biosimilars. This positions Lek, a Sabdoz company, among the few rare companies worldwide with knowledge and expertise in this area.

Lek actively recruits, predominantly highly qualified staff, which now account for 40% of 2,571 employees. There is considerable mobility of staff and many Lek associates have already taken up some of leading roles at Sandoz.

At Lek, the greatest credit for realisation of Lek’s vision to ´Become the leading Sandoz development and production center for difficult-to-make products´ is attributed to president of the board of management, who is also valued as a personal coach by many associates. Vojmir Urlep does not create an atmosphere of excellence and dedication only at Lek but for 16 years also as a lecturer on marketing at the Pharmacy faculty at the University of Ljubljana. Vojmir Urlep is active on many boards, such as the Pension Company A supervisory board, supervisory board of the Slovenian Chamber of Commerce and the strategic council for internationalisation at the Slovenian Chamber of Commerce.

All these achievements are a reason for which the management board of the Manager Association presents the Manager of the Year 2012 award to president of the Lek board of management, Vojmir Urlep.

About Manager of the Year Award

The members of the commission for selecting the Manager of the Year are: Tomaž Berločnik (chair), Franjo Bobinac, Jože Colarič, Tatjana Fink, Sonja Gole, Sebastijan Piskar, Sonja Šmuc and Dejan Turk. The Manager of the Year 2012 will be traditionally presented at the Management Congress on 27 September in GH Bernardin in Portorož. Last year’s winner of the award was Christof Droste, managing director of Hella Saturnus.

More about the reward and recent recipients on www.zdruzenje-manager.si 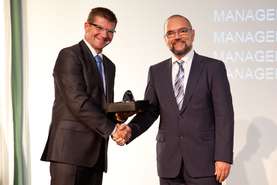 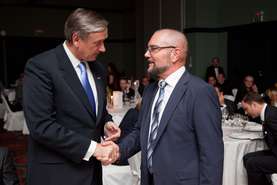 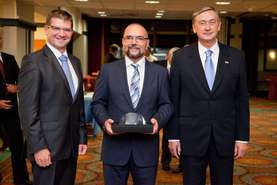 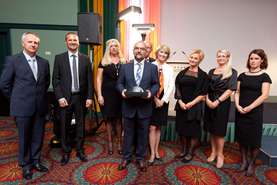 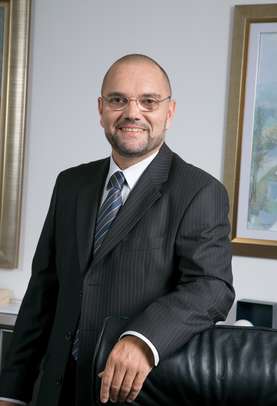 Photo for print
Vojmir Urlep, President of the Board of Management of Lek, a Sandoz company