For almost 60 years Slovenia has been celebrating a Children’s Week at the beginning of October – the Slovenian Friends of the Youth Association along with its members and the support of the long-term partner, Lek, a member of the Sandoz Group, will organise a series of events and activities for children – Presentation of the TOM telephone helpline call analysis

»He who reads reaches further than his arm can reach, sees better than with a naked eye, hears more than his ears can perceive and has a longer stride than his legs can manage,« wrote author Slavko Pregl in his address on the occasion of this year’s Children’s Week. Children’s Week has been celebrated in Slovenia for nearly 60 years and the motto of this year’s event is »Let’s go with a book into the world«. This year’s theme is to reflect upon what is considered to be a good book (among more than 1,000 books that are annually published in our country, only about 300 of them deserve to be rated as ‘good books’) as well as on the importance of reading in our formative years and beyond into our adult life. A particularly valuable contribution to the development of the reading culture among Slovenian children is also the Reading Badge project, organised by the Friends of the Youth Association (SAFY), which is celebrating its 50th anniversary in year 2011.

The Children’s Week, commencing today, has been for decades an important activity of SAFY. Because of its significance it has become generally acknowledged throughout Slovenian society. It is intended for both children and adults who should in this week scrutinize more closely and discuss more intensively all of the issues associated with the status of children in society, and the exercising of their rights as guaranteed by the Convention on the Rights of the Child, other international documents and the Slovenian constitution and laws.

Today, SAFY presented the key message of this year’s Children’s Week, the TOM telephone helpline call analysis and the final report on free holidays for underprivileged children through the humanitarian initiative Wink at the Sun. The main sponsor of this initiative is, for the thirteenth year running, Lek, a member of the Sandoz Group.

Lek and SAFY hand in hand during the Children’s Week

In fulfilling its mission and planning of the activities, the Friends of the Youth Association has been supported by Lek for 13 years. Together they are also implementing the humanitarian initiative Wink at the Sun through which Lek has so far allocated more than 195,000 Euros for free holidays for children throughout Slovenia. At this year’s Children’s Week they are jointly highlighting the importance of good books. These have always been a major and important part of pharmaceutical science and its development. »25 years ago, recognising the importance of books, we bought off a rich pharmaceutical-medical collection from the descendants of Bohuslav Lavička, the pharmacist of Czech origin, which includes publications from the natural science, medical and humanistic-philosophical field. While the books in this priceless collection contain knowledge which contributed to the creation of modern science, the books for children and youth feature stories that enrich young people’s lives and enable them to find a shelter and inspiration on their path to growing-up,« stressed Samo Roš, Head of HR and member of Lek Board of Management, on the occasion of the Children’s Week.

The Children’s Week is special also for Lek as proven by the exhibition of children’s works of art entitled »Let’s go with a book into the world«. The exhibition which has been set up by the children and teachers from the Lek Kindergarten for the sixth year in a row to mark the Children’s Week can be viewed until 14th October at the Lek Gallery.

Last year, more than 32,627 children called the TOM telephone, a helpline for children and youths. More than 6,500 callers needed advice, support or an extended conversation. Most often children were asking questions about love, followed by sex issues and peer relationships; as many as 36 children were in such distress that they were considering committing suicide. The helpline is most often used by children aged 12, 13 and 14, these are children in their most vulnerable years of growing-up.

»Social differences in our society are increasing which is felt most acutely by the children. Therefore we are very pleased that we were able to help children and families who live in difficult material circumstances in different ways with as much as one million Euros donated. On this occasion I would like to express a sincere thanks to all donors. The demand for free holidays was this year much bigger than last year; there were also significantly more donors. However the sums donated were smaller therefore we raised only slightly over 90,000 Euros. This amount made free holidays possible for about 300 children,« said mag. Franc Hočevar, President of the SAFY. 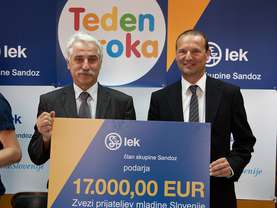 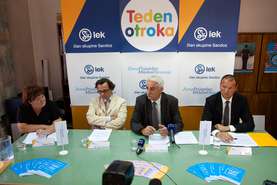