The holidays are in full swing and nearly 2,500 children are currently enjoying carefree holidays at the holiday camps of the Slovenian Association of Friends of Youth; quite a few of them were able to go on vacation due to the A Wink at the Sun charity campaign. But the children vacationing at the Villa Šumica in Kranjska Gora (Ljubljana Moste – Polje Association of Friends of Youth) are especially happy, since they were entertained by the Lek Sunshine Games and an honored guest, Slovene Volunteerism Ambassador and wife of the President of Slovenia, Barbara Miklič Turk. While the children chatted with the guests and enjoyed a show by the Kolenc Family Theater, the organizers of the humanitarian campaign presented the results of this year’s drive; words were also spoken of difficult situations among families, which are particularly painful during the holiday season, especially for children.

The Slovenian Association of Friends of Youth and its long-time partner Lek, a Sandoz company, held the A Wink at the Sun campaign this year for the thirteenth year in a row. To date, approximately 9,000 children have gone on holiday with the help of A Wink at the Sun. At the national level, this year’s campaign assisted nearly 250 children, and the local associations and societies also held their own donation drives, so that the total figure will be around 700. With the help of funds from the Fiho Foundation, 100 children with special needs will be going on holiday this year with the Association of Friends of Youth.

Secretary General of the Slovenian Association of Friends of Youth Majda Struc: “Although there were also a huge number of donators this year, perhaps even a few more than in previous years, total donations were down 20 percent; while donations from companies and organizations stood at only one fifth of their usual amount, individuals made exceptional contributions and donated according to their abilities, thus demonstrating that they are willing to help children even in difficult situations. I would like to sincerely thank all of them, as well as Večer, Delo and Slovenske novice for distributing a total of 174,000 money orders, and the banks, which waived their payment commissions. Of course anyone who still wishes to donate can contact the Slovenian Association of Friends of Youth or their local associations or societies.”

The A Wink at the Sun charity campaign, which SAFY is holding for the 13th year in a row with its partner Lek, a Sandoz company, has received contributions from Lek amounting to more than €195,000, of which €17,000 in 2011. As part of this campaign, Lek also organizes the Lek Sunshine Games – a special day of events that brighten the children’s summer holidays even further. Member of the Lek Board of Management Ksenija Butenko Černe: “The financial assistance that we have allocated for the A Wink at the Sun charity campaign means more than just numbers to Lek. It is proof of the good work and sacrifices of everyone participating at SAFY, whose warmth and positive attitudes allow the children’s world to be carefree and playful for at least a few days. Therefore today on behalf of Lek I would like to thank all of the volunteers and employees of SAFY, who for many years have worked for a better life and a better future for our children, and at the same time I call on other companies even in these difficult times not to forget about those who need our help the most – the children.”

In its 58 years of operation, the Association of Friends of Youth has taken nearly 20,000 children every year on carefree holidays at its holiday homes by the seaside and in the mountains, where they are joined by friendly teachers, healthcare workers and volunteers in fun sports and social activities. They improve their health, feel better, learn a lot of interesting things and make new friends in a friendly atmosphere. 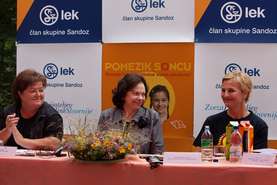 Photo for print
From left: Majda Struc, Secretary General of the Slovenian Association of Friends of Youth, Barbara Miklič Türk, Slovene Volunteerism Ambassador and wife of the President of Slovenija, Ksenjia Butenko Černe, member of the Lek Board of Management 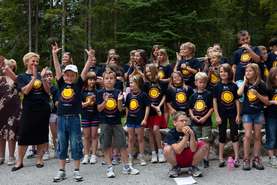