The central part of the congress is a professional symposium on the topic of gene therapy and biological medicines, held in cooperation with Lek, a Sandoz company.

The Slovenian Pharmacy Students’ Association under the auspices of the International Pharmacy Students’ Federation (IPSF) is holding the 56th IPSF World Congress from August 2 to 12 in Ljubljana. The purpose of the congress is to stimulate international discussion, review various pharmaceutical topics and link knowledge between countries, companies, students’ organizations and individuals. This is the first international congress to be held in Slovenia, and its main sponsor is Lek, a Sandoz company, which invests a great deal in knowledge development and is aware of the importance of supporting future professionals in the field of pharmacy.The central part of the congress is a professional symposium on the topic of gene therapy and biological medicines, held in cooperation with Lek, a Sandoz company.

“The IPSF, which includes around 350,000 pharmacy students from 70 countries around the world, holds a 10-day international students’ congress every year. This year is the 56th congress, and the first in Slovenia. Slovenia hosted the European congress a few years ago, but this year is our first world congress, and is a significant recognition of our Association and our country, as we are hosting around 350 students from all over the world,” said Urban Brumen of the Slovenian Pharmacy Students’ Association.

Professional symposium on the topic of gene therapy and biological medicines

Since biological medicines are becoming an indispensible part of modern therapy, the professional symposium at this year’s congress is dedicated to biopharmaceuticals. The congress organizer is joined by Lek, a Sandoz company, which has a state-of-the-art biopharmaceuticals development center in Menges and the only industrial center for biopharmaceuticals, i.e. production of biosimilar medicines, in Slovenia.

“Biological medicines are used to treat diseases that classical medicines cannot cure, but they are very expensive due to their highly demanding research and development. Biosimilar medicines, in which Sandoz is a global pioneer, are comparable to the reference products with respect to quality, safety and efficacy. Their advantage is a more affordable price, which makes them accessible to more people. Sandoz is currently the only company that offers three biosimilar medicines on the EU market. All three are already available in Slovenia. Our work at the Biopharmaceuticals Development Center at Lek in Menges makes a significant contribution to progress in this area,” said Andrej Francky of the Biopharmaceuticals Development Center at Lek, who presented Lek’s work and Sandoz’s leading role in the field of biosimilar medicines to the students at the symposium.

The professional symposium was held on Sunday, August 8, 2010 at the Hotel Mons in Ljubljana, starting at 9 am. It included presentations, workshops and a practicum, where the genetic analysis procedure was presented. The students prepared an exhibition of posters on biotechnology, through which they made a visual presentation of the topic. The presenters also touched on bioethics issues, and attempted to determine the limits, if any, of bioscience.

From workshops and social evenings to charity auctions

In addition to the symposium, many other interesting and instructive events were held during the congress, such as an educational symposium on the topic of leadership, a general assembly, workshops and social evenings. The students will also be holding an auction through which they will collect money to help pharmacy students from underdeveloped countries. 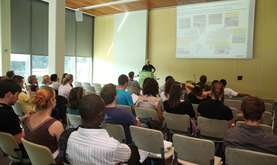 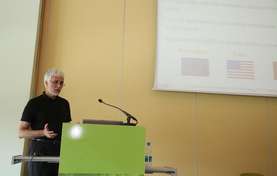 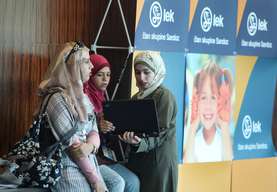