World Asthma Day (May 6, 2008) – Lek Bicycle Marathon For Better Breathing and the AsthmaMobile

A few minutes after 9 am a team of 11 cyclists from Lek with ultramarathon cyclist Marko Baloh at the head started the Lek For Better Breathing bicycling marathon, which the Asthma and Sports Association is organizing in cooperation with Lek in celebration of this year’s World Asthma Day. In five days they will ride around 850 kilometers from Ljubljana through Postojna, Nova Gorica, Jesenice, Cerklje, Velenje, Maribor, Murska Sobota, Lendava, Celje, Mengeš and back to Ljubljana. The cyclists were greeted at the start by Lek CEO Vojmir Urlep.

The mobile team from the Asthma and Sports Association started the course together with the cyclists, and will follow the cyclists and hold Asthma Schools in towns around Slovenia. Attendees will learn a great deal about asthma and also learn a few effective measures and exercises which make breathing easier and prevent serious deterioration. They will also be able to measure their basic respiratory functions and consult with professional personnel. The lectures and presentations for children will be held at the day care center in Postojna and at the Milojka Štrukelj Elementary School in Nova Gorica (May 12), the Josip Vandot Elementary School in Kranjska Gora (May 13), Elementary School no. II in Murska Sobota (May 14), and at the Bilingual Elementary School in Lendava and the Hudinja Elementary School in Celje (May 15). 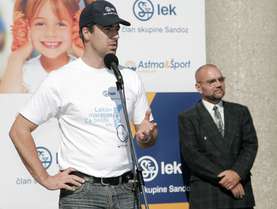 Photo for print
Dr. Milan Hosta, Chairman of the Asthma and Sports Society, and Vojmir Urlep, President of the Lek Management Board. 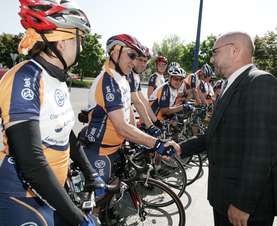 Photo for print
Vojmir Urlep shaking hands with the cyclists, wishing them luck before the tour. 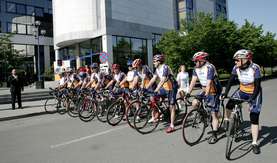 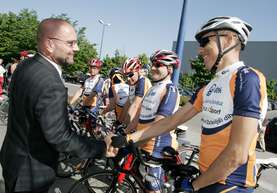 Photo for print
Having taken 3rd place in the Tour of Slovenia, Marko Baloh sets off on the tour with the Lek cyclists.