At a press conference on World Asthma Day, the Asthma and Sports Association emphasized the importance of healthy lifestyles and exercise for better living with asthma, and presented their planned activities. This afternoon a round table will be held at which athletes and sports personnel will discuss their experiences of living with asthma and sports, and a Lek bicycle marathon called For Better Breathing will be held from May 12 to 16 with Marko Baloh, which will be accompanied by the AsthmaMobile. In addition, with Lek’s support around 40 children participating in a swimming program for asthma sufferers will swim for free during the month of May.

Asthma is the most common non-contagious chronic disease among children. According to research in Slovenia from the year 2000 increasing numbers of people are contracting asthma, of whom at least 14 percent are children and youths. Around 75 percent of asthma patients are sensitive to effort. It should be mentioned that increasing air pollution and chemicals in the living environment also result in increased numbers of patients.

“Medicines are the key to good treatment of asthma, and physical activity plays an extremely important role in getting patients used to a healthy lifestyle. Correct breathing, relaxation and overcoming fear and anxiety are extremely important while asthma is intensifying. An active approach to controlling asthma is reflected in increased length of periods without symptoms or serious worsening of the disease,” says Dr. Milan Hosta of the Asthma and Sports Association. Ultramarathon cyclist Marko Baloh, Olympic skier Alenka Dovžan and Dr. Radoje Milič of the Faculty of Sport spoke at the press conference.

The athletes’ round table, which will be held today at 6 pm in the large auditorium at the Faculty of Sport in Ljubljana, will begin with a brief presentation by Dr. Milan Hosta entitled “Five Steps to Better Living with Asthma”. Invited guests Uroš Reisman of the Asthma and Sports Association, ultramarathon cyclist Marko Baloh, Olympic bronze medalist Alenka Dovžan, Director of the Rakitna Climatic Spa Peter Koščak and swimming coach Tomaž Torkar will speak about their experiences.

Lek bicycling marathon For Better Breathing and the AsthmaMobile

The Lek bicycle marathon For Better Breathing will be held from May 12 to 16, and will be accompanied by the AsthmaMobile. The purpose of the campaign is to raise awareness about the epidemic of asthma and allergies, invite people to presentations and workshops about successful prevention measures for asthma, encourage regular exercise and warn about the effects of increasing environmental pollution.

Ultramarathon cyclist Marko Baloh together with a team of cyclists from Lek will ride about 850 kilometers around Slovenia in five days. The route will take them from Ljubljana through Postojna, Nova Gorica, Jesenice, Cerklje, Velenje, Maribor, Murska Sobota, Lendava, Celje, and Mengeš and back to Ljubljana.

A mobile team from the Asthma and Sports Association will also travel the course of the bicycle marathon, and hold Asthma School in various cities in Slovenia. At the presentations visitors will obtain a great deal of information about asthma and learn some effective measures and exercises which make breathing easier and prevent serious deterioration. Measurement of basic respiratory functions will be available as well as consultation with professionals. The presentations will be held at the Milojka Štrukelj elementary school in Nova Gorica (May 12), the Livada elementary school in Velenje (May 13), Elementary School no. II in Murska Sobota (May 14) and the Hudinja elementary school in Celje (May 15). 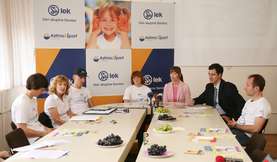 Photo for print
The press conference on World Asthma Day 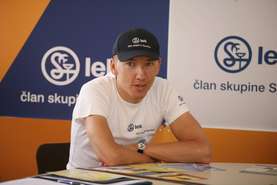 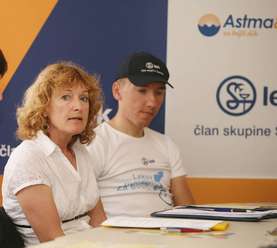 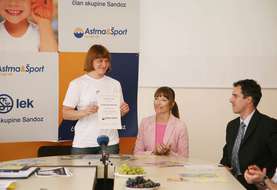