Lek, a Sandoz company, is dedicating this year's annual charity campaign to all pediatrics departments for preschool children at public healthcare centers in Slovenia – Caring for health and a better quality of life has been a part of our mission for over 60 years and will remain so in the future

A nicer visit with the doctor

Ljubljana, March 9 – Today, Lek, a Sandoz company, began its annual charity campaign at the Dr. Adolf Drolc Healthcare Center in Maribor, in the framework of which it will be sending special gift packages to all pediatricians and pediatrics departments for preschool children all over Slovenia, which will help them to brighten up their waiting rooms and offices and have something for the children before and after their checkups. The purpose of the campaign is to reduce children’s fears of going to see the doctor, and to help parents and healthcare personnel in helping them overcome those fears. Lek’s charity campaign will include nearly 100 healthcare centers all over Slovenia.

Visiting the doctor is often very stressful for both children and parents, so through its charity campaign Lek would like to make the healthcare centers a more child-friendly environment. “When they enter the waiting room, we would like for them not to see only bare white walls and monotonous decor, but for them to enter a more colorful area which will defuse their fears about visiting the doctor,” said Aleš Süssinger, Head of Sales and Marketing Slovenia at Lek, in describing the purpose of the charity campaign.

The gift packs which all of the pediatrics departments for preschool children in Slovenia will receive will include floor stickers, which they can affix to the floors in the waiting rooms or the offices, and turn the entire space into a fun game for the children. With the stickers – roads, trees, houses, fences, traffic signs, meadows, ponds, the sun – they can create little villages in the waiting rooms, where the children will be able to play or simply look at the colorful stickers.

In addition to the stickers, the pediatricians’ offices will also receive a package with fun cardboard cut-outs, which they can give to the children. The packages will contain a giraffe, a cow, a car and a doll with various dresses. All of the pediatricians will also receive a friendly plush toy, which they can dress with their stethoscopes and thus make their medical apparatus more friendly for their little patients. “Caring for health and a better quality of life has been a component part of our mission for over 60 years, and it will remain so in the future. Since we know that the majority of the healthcare centers do not have sufficient funds to furnish their waiting rooms and purchase small items to occupy children’s time, we will use this year’s charity campaign for that purpose,” added Aleš Süssinger.

Lek’s charity campaigns have become an annual event. Seven years ago, Lek began giving gifts to children before New Year’s, and in the last few years the campaigns have extended into the New Year. In 2000 Lek gave gifts to more than 1100 children in 14 healthcare and custodial institutions, and wished them all the best in the coming year with a puppet show Thumbelina. A similar campaign was carried out in 2001. In 2003, children in Slovene healthcare and custodial institutions were entertained by the antics of clowns – the Red Noses – and the institutions received funds to purchase equipment which would improve their work conditions. In 2004 Lek donated more than 1000 personal computers to numerous elementary and secondary schools, healthcare institutions and organizations which contribute to improving the quality of life of children, and to local associations throughout Slovenia. In 2005 the New Year’s charity campaign included creative workshops for children in Slovene hospitals, one-year subscriptions to the children’s magazine Petka and help in furnishing children’s corners. The campaign was very well received, and therefore this year Lek will again be providing one-year subscriptions to Petka magazine to all Slovene hospitals, so that in 2007 as well, all hospitalized children will be able to get their own magazine, which is designed to stimulate children’s curiosity through solving puzzles, reading, writing, drawing and logical thinking.

Lek Pharmaceuticals has been caring for health and a better quality of life in Slovenia for more than 60 years. It is engaged in the social environment in several areas, actively participating in the charity and healthcare fields and providing sponsorships in the areas of sports, culture, education and research. This year’s charity campaign is yet another part of Lek’s realization of its role as a corporate citizen as a component part of its mission. 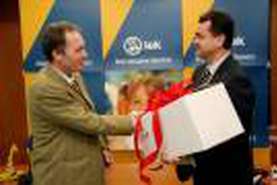 Photo for print
Aleš Süssinger, Head of Sales and Marketing Slovenia at Lek (right) presents the gift package to dr. Jernej Završnik, Head of Pediatric Department for Preschool children in the Healthcare center of dr. Adolf Drolc in Maribor 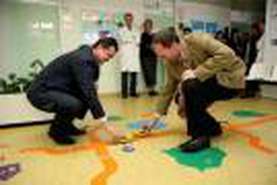 Photo for print
Waiting room at the Healthcare center of dr. Adolf Drolc, brightened up by Lek's floor stickers and card-board toys