Mengeš, September 28, 2006 – Today in Mengeš, Lek marked its 60th anniversary of development and announced the construction of a Biopharmaceuticals Development Center, which will consolidate Lek and Sandoz’s leading position in the field of biopharmaceuticals. The past, present and future of Lek were outlined by Janja Bratoš, President of the Lek Board of Management, Dr. Andreas Rummelt, CEO Sandoz and Mateja Urlep, Head of Biopharmaceuticals at Lek.

“Lek Pharmaceuticals is celebrating its 60th year. This is a respectable anniversary, and it is also admirable with respect to the pharmaceuticals industry. Behind us lies a period of which we can be justifiably proud, while before us lie new challenges. At Lek we constantly look towards the future, and today’s opportunity is the result of this orientation. By building this structure we are taking a major step into biopharmaceuticals – the technology of the future in pharmacy. Here we shall build the Biopharmaceuticals Development Center, the fruit of the knowledge of Lek professionals. It will consolidate the leading position of Lek and Sandoz in the technology of tomorrow, while it allows us to look back proudly on sixty years of effort which brought us to where we are today,” said Janja Bratoš, President of the Lek Board of Management.

The beginnings of the company go back to 1946, when the Lek pharmaceuticals plant was officially founded on October 31. From its initial stages, the company was characterized by dynamic development and an inclination towards the internationalization of its operations. The constant and intensive growth which is characteristic of Lek’s entire history has been especially evident in recent years, when biopharmaceuticals have come increasingly to the forefront of research and development. At Lek, biopharmaceuticals is our youngest program, in which we are fostering knowledge for development, manufacturing and analysis of biological active pharmaceutical ingredients and products, and contributing to their successful marketing.

“We are planning to make the Biopharmaceuticals program an exceptionally powerful program within both Lek and Sandoz. This field has an exceptional amount of potential, with the highest growth rate, and it promises a very interesting future, so we are clearly going to follow this path. Lek’s Biopharmaceuticals Development Center will contribute to Sandoz’s leading position in this field,” stated Mateja Urlep, Head of Biopharmaceuticals at Lek. According to the plans, the construction of the building, with a total surface area of approximately 2,800 m2, was begun in the autumn of 2006, and is expected to be completed in the middle of 2007. The value of the investment is 6.7 million euros. In the new development center, which will employ 100 professionals from the fields of microbiology, biology, biochemistry, chemistry and pharmacy, Lek will develop and manufacture biopharmaceuticals for Sandoz’s global markets.

Lek’s important role within Sandoz was also emphasized by Dr. Andreas Rummelt, CEO Sandoz: “The state-of-the-art technology and a highly skilled employees are essential to succeed in developing and manufacturing these products. Excellent qualification of the workforce and quality in operations therefore are the factors that give Slovenia an advantage in the competition for investments in such cutting-edge technologies. With the first manufacturing plant for recombinant products, opened in February 2004 also here in Mengeš, we are already leveraging these advantages. Now the Development complements this activity forming a center of excellence for cell culture technology in our global Biopharmaceuticals organization. The site here in Menges therefore is an essential cornerstone in our strategic concept. I am pleased that this sophisticated high-tech investment will be realized in Slovenia. It is not only proof for our commitment to this country but also reemphasizes again how beneficial the acquisition was for both, Novartis and Lek. I wish this project all the necessary success to be finalized safely and smoothly and I thank all the colleagues involved for their hard work, spirit and dedication.”

Biopharmaceuticals, or biological medicines, are drugs which are produced using recombinant DNA technology on the basis of human proteins (e.g. hormones, insulins, antibodies etc.). Lek began in-house development in the field of genetic technology in the eighties, and created a solid basis for the manufacturing of recombinant proteins, i.e. biopharmaceuticals, for human use. At the beginning the projects were purely research-oriented, while at the end of the nineties they grew into development projects and became Lek strategic projects with precisely defined objectives of intensive development work and the launching of biopharmaceuticals onto the market. In 2004 Lek opened the PORT1 plant in Mengeš, the first manufacturing plant for recombinant technology in Slovenia. The opening of the plant was a major step for Lek and Sandoz’s biopharmaceuticals program.

Lek, a Sandoz company, is one of the pillars of leading world generics company Sandoz. It operates as a global development center for products and technologies, as a global manufacturing center for active pharmaceutical ingredients and medicines, as a competence center for the development of vertically integrated products, as a Sandoz competence center in the field of development and manufacturing of biopharmaceutical products and as a supply center for the markets of CEE, SEE and CIS, sales Slovenia and sales services for Sandoz’s global markets. Lek d.d. employs about 2,850 people and achieved total sales of USD 656,5 million in 2005. For further information please consult http://www.lek.si

Sandoz, a Division of the Novartis group, is a global leader in the field of generic pharmaceuticals, offering a wide array of high-quality, affordable products that are no longer protected by patents. Sandoz has a portfolio of more than 600 active substances in over 5 000 forms worldwide. Key product groups include antibiotics, treatments for central nervous system disorders, gastrointestinal medicines, cardiovascular treatments and hormone therapies. Sandoz develops, produces and markets these drugs along with pharmaceutical and biotechnological active substances and anti-infectives. In addition to the strong organic growth in recent years, Sandoz has made a series of acquisitions including Lek (Slovenia), Sabex (Canada), Hexal (Germany) and EonLabs (U.S.) and sells its products in more than 110 countries. In 2005, Sandoz employed around 20,000 people worldwide and posted sales of USD 4.7 billion

Novartis AG (NYSE: NVS) is a world leader in offering medicines to protect health, cure disease and improve well-being. Our goal is to discover, develop and successfully market innovative products to treat patients, ease suffering and enhance the quality of life. Novartis is the only company with leadership positions in both patented and generic pharmaceuticals. We are strengthening our medicine-based portfolio, which is focused on strategic growth platforms in innovation-driven pharmaceuticals, high-quality and low-cost generics and leading self-medication OTC brands. In 2005, the Group’s businesses achieved net sales of USD 32.2 billion and net income of USD 6.1 billion. Approximately USD 4.8 billion was invested in R&D. Headquartered in Basel, Switzerland, Novartis Group companies employ approximately 91,000 people and operate in over 140 countries around the world. For more information, please visit http://www.novartis.com. 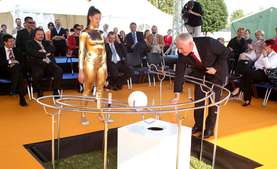 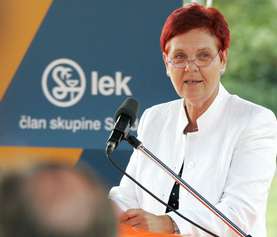 Photo for print
Janja Bratoš, President of the Lek Board of Management 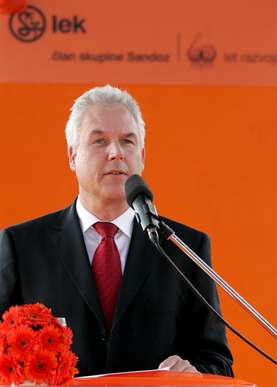 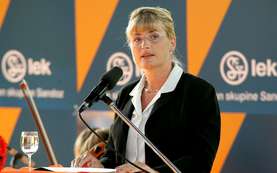 Photo for print
Mateja Urlep, Head of Biopharmaceuticals at Lek