Excess heat in the form of steam condensate that Lek, which is part of Novartis, can no longer use in its processes, but still retains a high temperature, is now being piped to Energetika Ljubljana and fed into the district heating system. In this way, both partners made it possible to reduce annual CO2 emissions due to fuel savings by 1,000 tons. The amount of heat used in this way is enough to heat or provide sanitary hot water for roughly 300 apartments, and the water they save would fill approximately 20 Olympic-size pools. The project represents a new circular economy good practice in Ljubljana, combining two different sectors - pharmacy and energy.

The project of recovering untapped industrial excess heat in the form of steam condensate was launched as a pilot by Energetika Ljubljana and Lek in mid-March 2020, at the time of the beginning of the COVID-19 epidemic. Energetika Ljubljana takes the excess heat, which Lek can no longer use in its processes, but due to the retained high temperature, it can be utilized in the district heating system to supply customers who need it for heating or sanitary hot water. Due to the recovery of the industrial excess heat from Lek, the need for its production as well as the consequent fuel consumption at Energetika Ljubljana's facilities has thus been reduced. At the same time, the water consumption of both partners is reduced; at Energetika Ljubljana by about 36,000 m3, which is equivalent to the volume of more than 14 Olympic-size pools, while the 15,000 m3 of cooling soft water saved by Lek would fill approximately 6 Olympic-size pools.

Reused industrial excess heat is environmentally friendly, as its production does not cause additional emissions, and at the same time allows the energy that would otherwise be released into the environment to be reused. After the pilot launch, the system has been working very successfully - with the excess heat recovered in this way, Energetika Ljubljana can supply about 300 apartments of 70 square meters, while both partners contribute to an annual CO2 emission reduction of 1,000 tons due to fuel savings.

The idea of building a system that would enable the transfer of excess heat to the heat distribution network reaches back to 2018, when at the initiative of Lek, which is part of Novartis, expert groups from both companies met and began analyzing the available quantities and heat parameters and a transfer point. The positive analysis results were followed by an agreement to the start the project and in September 2019 a contract endorsing the connection of the excess heat supplier to the recipient heat distribution system was signed. 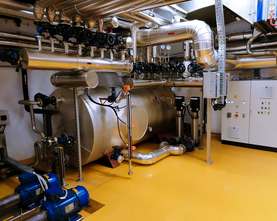 Photo for print
The steam condensate collector from Novartis' production of solid and sterile products in Ljubljana.