Zvone Bogdanovski, President of Lek Board of Management will retire end of April 2019. He is working in the company for more than 35 years. After graduating from the Faculty of Pharmacy in Ljubljana in 1983, he began his career in Lek as a researcher, analyst and research technologist. Since 1991 he spent the majority of his career in pharmaceutical marketing and sales management. He also graduated from Management at IEDC Business School at Bled.

In 1993 he was appointed head of pharmaceuticals sales in Central and Eastern Europe in 1993, in the period when Lek began to intensify marketing and sales of its products outside Slovenia. In this interesting and dynamic period through 1999, when he became head of pharmaceuticals sales, he and his colleagues developed the sales network that today still forms the basis of Sandoz sales in Central and Eastern Europe and the CIS.

Following the Novartis acquisition of Lek, and subsequently Hexal, he was deeply involved in the integration process, and succeeded together with his team in leading Sandoz to a market leading position in the markets he headed. Until the end of 2008, he further strengthened the leading Sandoz market position.

In 2009, he became Country Head Slovenia as part of a wider structural reorganization within Sandoz, following which he is also responsible for the South Eastern Europe. In the same year he was appointed a member of the Lek Board of Management. He assumed the role of President of the Board of Management of Lek d.d. and Novartis Country President on August 2, 2017.

The Supervisory Board will decide on the appointment of Zvone’s successor shortly.

Novartis is the leading provider of medicines in Slovenia, where Lek, Novartis Pharma Services and Sandoz, operate. Together we are building and maintaining the reputation of a dynamic, ethical, and trusted pharmaceutical company. Lek develops, manufactures, and markets effective, safe, and high quality medicines and active pharmaceutical ingredients. With our knowledge, quality, and experience we have gained an important role in Novartis' organizational structure, especially in the Novartis Technical Operations, Global Drug Development, Novartis Business Services, and the generic division Sandoz. We are the leading Sandoz development center, and one of the key development sites for technologically complex projects. We invest a great deal in the development, education, and training of our employees. Novartis invested in Slovenia more than EUR 2 billion since 2003. More than half of this investment has been devoted to development, and the rest to modernize and expand our production capacities.

Sandoz is a global leader in generic pharmaceuticals and biosimilars. As a division of the Novartis Group, our purpose is to discover new ways to improve and extend people's lives. We contribute to society's ability to support growing healthcare needs by pioneering novel approaches to help people around the world access high-quality medicine. Our portfolio of approximately 1,000 molecules, covering all major therapeutic areas, accounted for 2017 sales of USD 10.1 billion. In 2017, our products reached well over 500 million patients. Sandoz is headquartered in Holzkirchen, in Germany's Greater Munich area.

Novartis is reimagining medicine to improve and extend people’s lives. As a leading global medicines company, we use innovative science and digital technologies to create transformative treatments in areas of great medical need. In our quest to find new medicines, we consistently rank among the world’s top companies investing in research and development. Novartis products reach more than 750 million people globally and we are finding innovative ways to expand access to our latest treatments. About 105 thousand people of more than 140 nationalities work at Novartis around the world. Find out more at www.novartis.com. 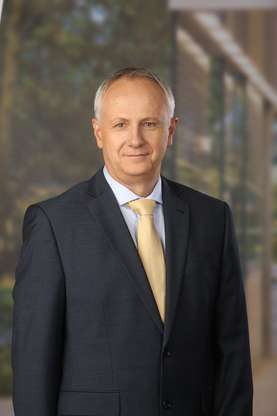 Photo for print
Zvone Bogdanovski, President of Lek Board of Management