Robert Ljoljo, President of the Board of Management 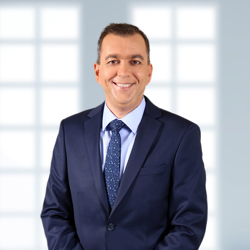 In 2000, Robert Ljoljo received a Master of Science in Management of Information Systems from the University in Maribor and in 2017, a Master of Business Administration (MBA) from Open University UK. He is further building his knowledge and skills in Slovenia and abroad (IEDC Bled, IMD Lausanne, Harvard Business School, Novartis Leadership Training etc.).

Robert Ljoljo first joined Lek as a student in 1993, in the quality assurance department. He started his full time career with the company in 1997, in Information Technology where he worked until 2009. As Head of Competence Center for Manufacturing Execution System (MES) he successfully established the Global Competence Center and created the foundation to implement this model across other Sandoz manufacturing sites. In addition, he was actively providing help to the global Technical operations team.

As Director SCM during 2009 and 2013, he significantly contributed to the success of this organization with particular regard to focusing on customers, introducing new products, and managing working capital. He helped Lek d.d. to become one of the leading Sandoz Supply Centers.

In 2013, he pursued his professional career as Director of Indirect Purchasing (2013–2015) for Lek and Sandoz d.d., followed by the position of Country Head Procurement for Slovenia and TechOps Business Partner and cluster Head for CEE (2015–2017).

By the time he was appointed President of the Board of Management of Lek d.d., Robert was Slovenia Country Representative for Novartis Business Services (NBS) since 2014 establishing links between local and global NBS organizations, including joint business services in IT, Procurement, Real Estate and Facility Services (REFS), Finances, and HR Services that deliver services to all Novartis divisions.

Since 2007, he was very closely involved in the Sandoz and Novartis global network. Prior to his appointment as President of the Board of Management of Lek he was Global Head Novartis Technical Operations Procurement Strategy and Operation Excellence.

During his more than 20-years career, he successfully implemented several new technology solutions and systems and managed large teams in country, regional and global positions. He received a number of Sandoz and Novartis Awards of Excellence.

As of September 1, 2019, Robert Ljoljo, MSc, MBA, has been appointed the President of the Board of Management of Lek d.d.