Novartis, Amgen and the Banner Alzheimer's Institute (BAI) announced an expanded collaboration to initiate a new trial - the Alzheimer's Prevention Initiative (API) Generation Study 2. This trial follows the launch of the Generation Study 1, and will determine whether the BACE1 inhibitor CNP520 can prevent or delay the onset of Alzheimer's disease symptoms in a high-risk population. BACE1 is an enzyme that plays an important role in the production of Amyloid ß, a protein which accumulates in the brains of individuals with AD years before clinical symptoms begin. More information on the sites participating in Generation Study 2 can be found at Clinical trials.gov and in the website www.GenerationProgram.com.

"Expanding our collaboration with Banner Alzheimer's Institute stands testament to our belief that preventing amyloid buildup is one of the most promising approaches to treating Alzheimer's disease," said Vas Narasimhan, M.D., Global Head Drug Development and Chief Medical Officer for Novartis. "If we determine that our BACE1 inhibitor can prevent or delay the onset of symptoms in healthy yet high-risk populations, this would represent a tremendous breakthrough for those that may face this debilitating disease."

The Generation Study 2 started enrolling participants in the US in August 2017, and will eventually include more than 180 sites in more than 20 countries around the world. This five-year study will recruit approximately 2,000 cognitively healthy participants, aged 60 to 75, who are at high risk of developing AD based on their age and who carry either two copies of the apolipoprotein E (APOE) 4 gene or one copy of the gene with evidence of elevated brain amyloid. This is different from the Generation Study 1, which only targeted those who carry two copies of the APOE4 gene. APOE4 is the major genetic risk factor for late-onset Alzheimer's disease. Roughly one in four people carry a single copy of the APOE4 gene, but only about two percent of the world's population carries two copies.[3] Eligible participants will be randomized to receive placebo or one of two doses of CNP520 (15 mg or 50 mg), co-developed by Novartis and the biotechnology company Amgen.

"This expanded collaboration builds upon the API Generation Study 1 which launched last year, and is another step in our effort to take clinical trials to a critical new stage," said Pierre N. Tariot, MD, co-director of API and director of BAI, a division of Banner Health, one of the largest nonprofit healthcare systems in the U.S. "This approach continues to shift the Alzheimer's research paradigm from reversing disease damage to attacking its root cause before symptoms surface. It is our hope that by targeting people earlier, we will have a better chance of delaying or preventing the onset of the disease."

Participants will be recruited via multiple venues, including, in the US, the Alzheimer's Prevention Registry's GeneMatch program (www.endALZnow.org/GeneMatch). GeneMatch is a first-of-its-kind program designed to identify a large group of people interested in volunteering for Alzheimer's disease prevention research studies, based in part on their APOE genetic information.

About the Generation Program

The Generation Program consists of two pivotal Phase 2/3 studies. The studies are testing whether investigational anti-amyloid treatments might prevent or delay the emergence of symptoms of AD in people at particularly high risk for developing the disease at older ages because of their genetic status.

The Generation Study 2 is examining whether the BACE1 inhibitor CNP520 can prevent or delay the onset of the symptoms of the disease in individuals who are at high risk of developing AD because of their age and because they carry either one or two copies of the APOE4 gene. Those with one copy will require evidence of elevated brain amyloid.

The Alzheimer's Prevention Initiative (API) is an international collaborative research effort formed to launch a new era of Alzheimer's prevention research. Led by the Banner Alzheimer's Institute, the API conducts prevention trials in cognitively healthy people at increased genetic risk for Alzheimer's disease. It will continue to establish the brain imaging, biological and cognitive measurements needed to rapidly test promising prevention therapies and provide registries to support enrollment in future prevention trials. API is intended to provide the scientific means, accelerated approval pathway with the cooperation of the regulatory agencies and enrollment resources needed to evaluate the range of promising Alzheimer's prevention therapies and find ones that work. For more information, go to www.banneralz.org.

1. Alzheimer's Association 2015. Changing the Trajectory of Alzheimer's Disease: How a Treatment by 2025 Saves Lives and Dollars

Novartis provides innovative healthcare solutions that address the evolving needs of patients and societies. Headquartered in Basel, Switzerland, Novartis offers a diversified portfolio to best meet these needs: innovative medicines, cost-saving generic and biosimilar pharmaceuticals and eye care. Novartis has leading positions globally in each of these areas. In 2016, the Group achieved net sales of USD 48.5 billion, while R&D throughout the Group amounted to approximately USD 9.0 billion. Novartis Group companies employ approximately 121,000 full-time-equivalent associates. Novartis products are sold in approximately 155 countries around the world. For more information, please visit http://www.novartis.com. 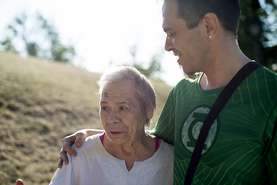