Lek, a Sandoz company, has improved all indicators of environmental performance

Lek, a Sandoz company, has retained the role of an important employer in Central Slovenia, Koroška and Prekmurje. The number of employees was raised last year in Prevalje by 15%, Mengeš by 11%, Lendava by 4% and Ljubljana by 2%. The company had 3,124 full-time employees as at the year-end, a 5% increase from 2013. All major indicators of environmental performance have been improved and investments in environmental protection have continued within the scope of intensive investment activities. An overview of economic, environmental and social impacts of their operations have been presented in the recently published Sustainability Report of Lek d.d. for 2014.

As a result of its planned and systematic investments in staff development, education and training, Lek, a Sandoz company, has received the Top Ten Training Management award for the thirteenth time in a row. The Family-friendly Company certificate has been renewed, reaffirming the company’s endeavours to have a work environment that facilitates finding a balance between professional and private life.

Lek, a Sandoz company, invested 2.9 million euro in environmental protection, which included a partial rehabilitation of sewage system in Ljubljana and installation of new oil traps on all locations. A new steam boiler with improved thermal efficiency was installed in Mengeš. The technological equipment for regeneration of waste reagent was installed in Lendava and the façade of the tablet production plant in Ljubljana was renovated and the plant’s energy efficiency improved.

Whilst complying with regulatory and other requirements, including strict Novartis standards, Lek undertook a number of projects to improve energy efficiency resulting in annual savings of 34.2 TJ of energy and reduced CO2 emissions by 1,408 tonnes. Although the production rose by 20%, the consumption of energy, and electricity in particular, went up by only 2% and 5% from the previous year, respectively.

Lek managed to improve all major environmental performance indicators compared to 2013. The emissions of volatile organic compounds per tonne of products fell by 34%. Energy efficiency was improved by 15%, and the quantity of waste and water consumption efficiency were reduced and increased by 10%, respectively, measured per tonne of products. Water consumption efficiency has been improved most in Prevalje, by 23%, followed by Lendava with 16%, Ljubljana with 10% and Mengeš with 7%.

Lek, a Sandoz company, has been reducing the emissions of volatile organic compounds into air for a number of years. A changed technological process was introduced on the site in Ljubljana last year whereby ethanol-based coating was replaced by water-based coating for one category of omeprazole. A modified process of production of an active ingredient was successfully introduced in Mengeš and the use of dichloromethane eliminated from the technological process.

Studies to replace the ethanol stage with a water one in the coating process have continued in Prevalje after methylene chloride was fully replaced by ethanol in 2011.

Lek, a Sandoz company, reuses and recycles waste originating from the production of pharmaceutical active ingredients. The leading location in the processing and reuse of organic solvents is Lendava where 97% of organic solvents are reused (Lek as a whole achieves 91%). A project that should increase the share of regeneration in Lendava even further is in the implementing stage.

Health and safety was the only segment where Lek, a Sandoz company, failed to meet the plan in full in 2014. After a number of years in which the number of accidents at work resulting in sick leaves was falling, seven accidents requiring absence from work were recorded last year. In response, Lek, a Sandoz company, has taken a number of additional steps to improve the culture of acting in line with and being aware of the importance of safety at work, which also involve suppliers.

Lek, a Sandoz company, celebrated in 2014 the tenth anniversary of its participation in the Community Partnership Day a global initiative by Novartis aimed at local communities. The initiative has become one of the most important tools for promoting social responsibility of employees. In the ten years, the 2,900 Novartis employees in Slovenia performed more than 23,000 hours of volunteer work, assisting more than 10,000 individuals and 40 non-profit organisations.

The 2014 Sustainability Report of Lek d.d. was prepared in line with the Responsible Care programme, the EMAS (Eco-Management and Audit Scheme) and the GRI (Global Reporting Initiative) G4 international sustainability reporting guidelines.

Lek, a Sandoz company, is one of key pillars of the second-largest generic pharmaceutical company globally. Its role within Sandoz is to act as: a leading global development center for technologically demanding products and technologies; a global manufacturing center for active pharmaceutical ingredients and medicines; a competence center for the development of vertically integrated products; a Sandoz competence center in the field of development and manufacturing of biosimilar products; and, a supply center for the markets of Central and Eastern Europe (CEE), South East Europe (SEE) and Commonwealth of Independent States (CIS), and it is responsible for sales on the Slovenian market. For further information please visit http://www.lek.si/en.

Sandoz, a division of Novartis, is a global leader in generic pharmaceuticals, driving sustainable access to high-quality healthcare. Sandoz employs more than 26,000 people worldwide and supplies a broad range of affordable products to patients and customers around the globe.
The Sandoz global portfolio comprises approximately 1,100 molecules, which accounted for 2014 sales of USD 9.6 billion. Sandoz holds the global #1 position in biosimilars as well as in generic anti-infectives, ophthalmics and transplantation medicines. Sandoz also holds leading global positions in key therapeutic areas ranging from generic injectables, dermatology and respiratory to cardiovascular, metabolism, central nervous system, pain and gastrointestinal.
Sandoz develops, produces and markets finished dosage form (FDF) medicines as well as intermediary products including active pharmaceutical ingredients (APIs) and biotechnological substances. Nearly half of the Sandoz portfolio is in differentiated products – medicines that are scientifically more difficult to develop and manufacture than standard generics.
In addition to strong organic growth since consolidating its generics businesses under the Sandoz brand name in 2003, Sandoz has consistently driven growth in selected geographies and differentiated product areas through a series of targeted acquisitions, including Hexal (Germany), EBEWE Pharma (Austria), and Fougera Pharmaceuticals (US).
Sandoz is on Twitter. Sign up to follow @Sandoz_global at http://twitter.com/Sandoz_Global. 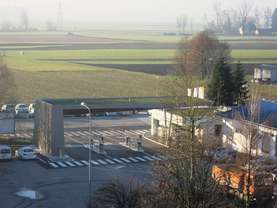