Today, the Red Noses presented their new program for mentally handicapped children – a performance called Caravan Orchester. This is the first program of this kind in Slovenia. Once again, their long term partner, Lek, a Sandoz company, is supporting them in fulfilling their mission.

In the Druga violina restaurant at Stari trg in Ljubljana old town, the Red Noses presented the Caravan Orchester program. This performance, designed specifically for children with mental disabilities, was designed and donated to the International RNI organisation, a part of which are also the Slovenian red nosed clown-doctors, by Stichting CliniClowns, the clown-doctor organisation from the Netherlands.

The performance is based on a story about three musicians who leave the circus and wish to establish their own band – so they search for musicians to join them. They find them among the audience. The performance has a simple structure which serves as an essential means through which three clowns enter into the world of the children. The action involves a musical, tactile and visual experience. The clowns address the children individually thus establishing one-to-one contact which is essentially also the guiding principle behind the methods adopted by clown-doctors working in hospitals. In this way the children can relax within the performance and experience it at the level of their own capabilities, needs and desires.

A great deal of attention is paid to the preparation for the performance. The clowns learn about each participant in the performance, learn about his/her specifics – physical and psychological – in order to be able to approach him/her, reach out and create moments of personal connection.

It is also important to be sensitive to the conditions for carrying out the performance as this is a necessary prerequisite to creating a calm and relaxed atmosphere in which the children can unwind and feel at ease. The number of participants is limited, as it is important to give sufficient attention and time to the children and allow them to accept the clowns to their world.

Eva Š. Maurer: »The Red Noses have been visiting institutions for children with special needs for many years. Gradually, a desire arose for additional knowledge about how to work with mentally handicapped children so that they can derive the maximum benefit from us. The Caravan Orchester performance is the answer to this desire. The children, as participants in the performance, received it whole heartedly and really enjoyed it. Through our colleagues, who act in it, the performance also taught us all how to approach children with a mental handicap. Although not all clowns participate in the Caravan Orchester, we quickly adopted the basic principles of the approach from our colleagues. An important part in this performance is played by the keys – they open a chest with instruments and they themselves become an instrument in the hands of the children. There is also a very special key which consists of attention, listening and time – this key opens the door to the world of mentally handicapped children.

The Red Noses warmly thank our general sponsor Lek, a Sandoz company, for supporting us for a number of years in our regular programs which we carry out in hospitals across Slovenia, as well as for their support in the new Caravan Orchester performance.«

The Caravan Orchester program is one of the ways we can approach the children and adolescents with special needs. Also, parents and carers of young people with specials needs are in certain situations confronted with the same question of how to approach them. Dr. Branka Jurišić, who was involved in the development of this program in Slovenia, says:

»It is wonderful if a performance can come to those children and adolescents who cannot go out often to visit a theatre or other events. Children with mental disabilities comprise an especially vulnerable group among children with special needs and need a lot of encouragement and stimulation. This performance is designed so as to provide stimulation to which every single child can respond. Some will be attracted by the sounds, others by objects offering various touching and feeling sensations. Despite the abundance of stimuli, these are gentle, unobtrusive and attract their attention and encourage them towards an active response adapted to their needs. And this is the greatest value of this performance. The actors play out their parts with feeling and interact with each child in a different way – they attune to the children’s needs and use different methods with regard to their responses. The performance will very likely be watched with interest also by experts and parents as some activities are such that can be also used in everyday life.«

Lek, a Sandoz company, has been supporting the Red Noses from the very beginning

The Red Noses have been operating for ten years, and Lek, a Sandoz company, has been supporting them since 2008.

»The work carried out by the Red Noses is remarkable. They bring joy to child and adolescent patients of all ages, carry them into a phantasy world and thereby, in addition to medical care, represent a significant support in overcoming the obstacles on the way to greater well-being. Medical staff, parents and last but not least, patients note, that they can deal with health problems much more easily if they are visited in their rooms by clown-doctors who redirect their thoughts for a few moments, change the atmosphere, invite them into the world of play and thereby also help them to face their illness. We immediately welcomed the idea behind the Caravan Orchester as it is a charming novelty for the children with special needs in Slovenia. The mission of the Red Noses is closely intertwined with our care for health and wellbeing therefore we are happy to support them on their way, said Katarina Klemenc, Head of Corporate Communication at Lek, a Sandoz company.

»Lek, a Sandoz company, has been a Red Noses partner for a number of years. We are glad that, in offering their support, they are aware that several factors are necessary for quality work, continuous education and research and developing new programs among them. The situation was similar when designing and implementing the Caravan Orchester performance, where they offered us their support,« added Eva Škofič Maurer. 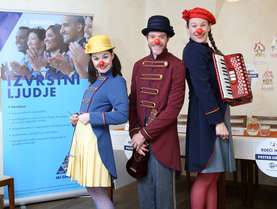 Photo for print
Members of the Caravan Orchester 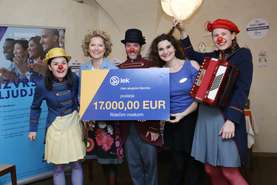 Photo for print
Katarina Klemenc, Head of Corporate Communications presented the Red noses with the check for the performance Caravan Orchester 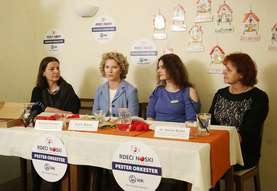 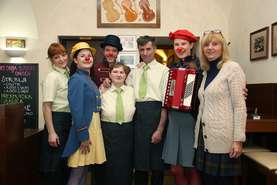 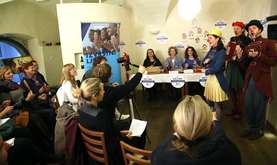