On World Spirometry Day, celebrated on June 27, the 6th annual Lek “For Better Breathing” cycling marathon started in Lendava at 10.30 am. The cycling event is organized by the Spolint Institute and Lek, a Sandoz company. The purpose of this 400-kilometer long route is to raise awareness of the seriousness of pulmonary diseases and the importance of their early detection. The cycling team will be accompanied by a mobile team from the Asthma & Sports program, which will perform free pulmonary function testing with a spirometer in Lendava, Metlika and Ribnica.

As each year so far, the ultramarathon cyclist Marko Baloh will join the team of Lek cyclists who will begin the marathon for the first time in Lendava. Tomorrow the cycling team will stop in Metlika and on Thursday in Ribnica. On Friday the cyclists are expected to finish the marathon in Ljubljana in front of the Lek’s building.

Free measurements of lung volume and speed of exhaled air will be available for the visitors of the marathon in Lendava, Metlika, and Ribnica. Free spirometry testing will be performed under the supervision of a professional team from the Asthma & Sports program giving advice on how an active and healthy lifestyle contributes to preserving healthy lungs.

Spirometry is a fast, easy, and extremely accurate method for early disease detection as it enables the identification of different breathing obstacles before the patient experiences them, which is a key to effective treatment and slower disease progression.

“Many pulmonary diseases can be prevented or better managed if they are detected earlier using a simple test with a spirometer,” said Dr. Milan Hosta, Director of the Spolint Institute and head of the Asthma and Sports project. “Most patients with chronic pulmonary disease are unaware of their condition. They consider dyspnea and coughing as a part of their lives and do not visit a physician. Asthma as well as other pulmonary diseases require a serious approach as they are considered serious medical conditions which are among leading causes of mortality worldwide. On World Spirometry Day we want to raise public awareness of the risk factors such as smoke, polluted air, and dust affecting our delicate respiratory organs.”

Asthma & Sports program promotes a healthy lifestyle and physical activity for a better quality of life with asthma and other pulmonary conditions. The program engages patients in various activities to help them understand this most common chronic pulmonary disease.

“As a part of Sandoz we are one of the leading manufacturers of high-quality generic products for treating asthma. We are aware that early detection and active management of pulmonary diseases is extremely important for maintaining quality of life. Therefore we have supported and helped create the program for raising awareness of pulmonary diseases by cooperating with the Spolint Institute for six years now”, said Mojca Pavlin of Lek, a Sandoz company. “In addition to the cycling marathon and free spirometry testing on World Spirometry day we also sponsor a month of swimming and holidays for children with asthma in Pacug.”

Free pulmonary function testing with a spirometer within the 6th annual Lek cycling marathon will be held on: 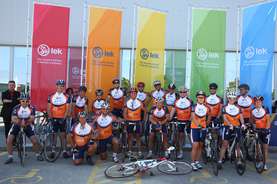 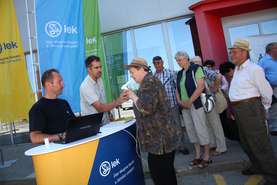 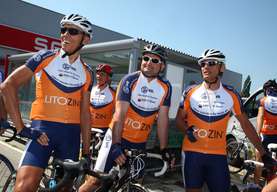