Awards presented for prevention of interpeer violence through the UNICEF project “SPEAK UP! Let’s talk about violence among children. For safe schools.”

On World Children’s Day, UNICEF Slovenia presented awards to seven elementary schools which are trying to create a safer school environment through the UNICEF project “SPEAK UP! Let’s talk about violence among children. For safe schools.” This year the winners included the Milojka Štrukelj, Bičevje, Zalog, Duplek and Slava Klavora elementary schools. Two new members of the Safe Schools family, the Tabor and Kolezija elementary schools, received special mention. The “SPEAK UP! Let’s talk about violence among children. For safe schools.” project is a joint project by UNICEF Slovenia, the Zaletalnica Institute, Lek and Mercator, which have been joined this year by McDonald’s. The project raises awareness among youths, parents and teachers about what violence is, that it is not acceptable in any form and how to react to it. This is the fifth year of the project, which now includes 16 elementary schools which are actively trying to prevent interpeer violence.

For the fifth year in a row, UNICEF Slovenia is implementing a project against interpeer violence in 16 elementary schools, whose objective is to create a safe and supportive environment for children. Violence in any form is unacceptable, and simply having an orientation towards actively raising awareness among children and adults about what constitutes violence and the ways that violence can be effectively prevented or dealt with leads to the desired goal. The project activities are directed towards increasing the level of awareness of the problem of interpeer violence among students, all school employees (teaching staff, principal, technical personnel and others), parents and the local environment. Violence includes physical and/or psychological violence, and is primarily based on social, sexual, racial and other stereotypes. Therefore, raising the level of awareness about the existing forms of the manifestation of violence and the potential solutions is an important step towards creating a safe environment for children in schools.

The results of the five-year project are encouraging in that the number of participating elementary schools has constantly increased. Even more significant is the increase in the sensitivity of teachers, professional and other staff at schools with regard to recognizing various forms of violence, which has led to an increased number of possible forms of intervention when violent behavior appears. At the same time, we should not overlook the active participation in the prevention of interpeer violence by children and youths through peer counseling. All of these factors have contributed to the creation of positive self-images, the recognition of their roles and a benefit to society through the humanization of interpersonal relations.

The successful results, attitude and will of all of the participants in the “SPEAK UP! Let’s talk about violence among children. For safe schools.” project, including the students, parents, school staff, local communities, sponsors and supporters of the project, confirm the belief that a safe school environment and the healthy development of our children can be achieved through combining our efforts and strengths.

This year’s award ceremony for the most successful elementary schools, which was held at the Mini Theater in Ljubljana, was dedicated to the topic of interpeer violence, which students from the Slava Klavora, Bičevje and Spodnja Šiška elementary schools presented through various forms of artistic expression (situational sketches by peer groups, presentation of camps for bullies, presentation of cartoons on the theme of interpeer violence). Five particularly deserving schools with regard to the development and results of the project, the Milojka Štrukelj, Bičevje, Zalog, Duplek and Slava Klavora elementary schools, received awards and flags from representatives of the project sponsors: Katarina Klemenc, Head of Corporate Communication at Lek, a Sandoz company, Mateja Jesenek, Member of the Board of Directors of the Mercator Business System and Tatjana Đukić, Director of McDonald’s Slovenia. New members of the Safe Schools family, the Tabor I and Kolezija elementary schools, received certificates of honorable mention from representatives of UNICEF Slovenia.

At the awards ceremony the representatives of the sponsors stated:

Katarina Klemenc, Head of Corporate Communication: “Lek, a Sandoz company, has been a sponsor of the “SPEAK UP! Let’s talk about violence among children. For safe schools.” project for four years.
We immediately recognized that this was a project that was beneficial and important for children. We also think that it is important that both students, their parents, teachers and other professionals employed at the schools, and even individuals from the local communities are participating in the project. Together they listen to all of these children and work with them to solve their issues and challenges, which is what makes this project so special and so needed. For instance, if only one of the participants in a situation closes their eyes, it makes it difficult to reach a solution. Therefore we find the right way together and help children with the trouble that they find themselves in.”

Mateja Jesenek, Member of the Board of Directors: “Mercator has been one of the sponsors of the “SPEAK UP!” project for three years. The project is very important because of its early development of sensitivity for recognizing and preventing violence. Children who encounter the initial forms of interpeer violence early on then have to learn the skills in order to prevent it. We all have to help them with this. At Mercator we believe that these are very important projects for our children and for the future of our society. We are all part of its creation and development, through concrete efforts and actions. Therefore we at Mercator have had very good experiences as sponsors of the “SPEAK UP!” project, since the project is designed to achieve very concrete results. We would like to continue to participate in the future, since we together with our children create the environment in which they grow up and find their place. Therefore we have to support true values and believe in the possibility of positive changes.”

Tatjana Đukić, Director of McDonald’s Slovenia: “McDonald’s has participated in World Children’s Day for many years with charity campaigns which support childhood development, quality care for sick children or the creation of a supportive and safe environment. This year we are excited about working with UNICEF, whose project “SPEAK UP!” supports the development, knowledge and increasing of the safety of our children in Slovenia, which is also the philosophy and desire of our company in planning for our children’s future. Investing in the local community is part of our company’s strategy which brings benefits to everyone, and the “SPEAK UP!” project is a wonderful campaign which we are happy to support.”

On World Children’s Day (November 20), UNICEF Slovenia reminds all of us of our responsibility to use our behavior, thoughts and creativity to create a world suited to children. On November 20, 1989 the UN General Assembly adopted the Convention on the Rights of the Child, which was the first universal code of children’s rights. The rights of children in developing countries, where the primary goal is simply survival, are contested and not respected. At the same time we mustn’t overlook the fact that children’s development is also threatened in industrially developed countries. The children in these countries are not struggling for basic survival, but nevertheless many different factors, e.g. violence, threaten their personal development and educational achievements. It is therefore important to learn and to know how to react to the issues which affect childhood, growing up and development. 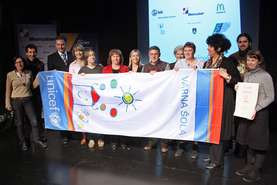 Photo for print
Schools that received awards and flags and the representatives of UNICEF, Zaletalnica, Lek, Mercator and McDonalds 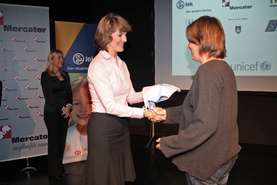 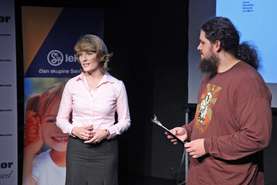