This year, 13 elementary schools are participating in the project SPEAK UP! Let's Talk about Violence among Children. For Safe Schools. A competition for a comic strip about methods of solving peer violence revealed the exceptional creativity of the students – the project is being sponsored for the third year in a row by Lek, a Sandoz company and the Mercator Business System

This school year, 13 elementary schools from all over Slovenia are participating in the project SPEAK UP! Let’s Talk about Violence among Children. For Safe Schools. At a press conference today held at the Slava Klavora Elementary School in Maribor, UNICEF Slovenia in cooperation with the Zaletalnica Society, which coordinates the programs at the schools, and the project partners Lek, a Sandoz company and the Mercator Business System presented the results of the successful implementation of the project. They demonstrate that the best way to successfully control peer violence is through cooperation. Boštjan “Pajama” Gorenc, a supporter of the project, also spoke about the importance of preventing peer violence.

At the beginning of the year, as part of the project SPEAK UP! Let’s Talk about Violence among Children, UNICEF Slovenia held a competition for a comic strip on the topic of peer violence, which included students from all 13 elementary schools that are involved in the project. The response to the competition was enormous, and the students showed that their creativity knows no bounds, even when solving serious problems like peer violence. At today’s press conference the students put on a sketch which showed their perspective on peer violence and how they deal with it. Using various scenarios for resolving conflict situations they showed that peer violence can be prevented or dealt with in several different ways and that there is no single answer or solution to it. The winning strips are poignantly titled Let’s Be Friends and Adults, Listen to Kids. The first was written by students from the Slava Klavora Elementary School in Maribor (Dolores Toplak, Kristina Berisha and Iris Knechtl), and the second was written by students from the Prežihov Voranc Elementary School in Maribor (Ruža Zečevič and Sabina Vukalič).

In order to raise awareness about the problem of peer violence, in 2006 UNICEF Slovenia began running the advocacy project SPEAK UP! Let’s Talk about Violence among Children. For Safe Schools. “Peer violence is a serious problem that we simply can’t afford to ignore. The project is therefore oriented towards raising awareness among children and adults about what constitutes violence, that violence is unacceptable in any form and about methods for successfully preventing or dealing with violence. It is important that this is a cooperative effort by students, teachers, school employees and parents, from whom this form of violence is often concealed,” said Boštjan “Pajama” Gorenc, a supporter of the project and a major youth advocate.

The results of the five-year implementation of the project are extremely encouraging and are reflected in different areas at all of the schools involved in the project. There are fewer students who do not tell anyone if they experience peer violence (at the beginning of the project the percentage of such students ranged between 12-15% at the individual schools, while after one year this figure had fallen to 3-5%). The students believe that school professionals notice incidences of peer violence more often and also take action more often when they observe incidents of peer violence (the percentage of students who believe that school professionals notice and react to violent behavior among peers increased from 10%-20% after the first year of the project). After two years of implementing the project a feeling of increased security was observed at the majority of the schools (the majority of the students feel safe or very safe). These results do not suggest that there is no peer violence at the schools participating in the project. But there are clear rules, consequences and various ways of dealing with difficulties. At least two thirds of the students are prepared to help those who experience violence (they can help them during the situation or find an adult for help). Some stories about how onlookers took action were portrayed in the comic strips in the competition. It should be emphasized that the schools are in a process of moving from the difficulties they have with students and/or among students towards searching for solutions both in working with the students and parents and in working with other employees, which consequently improves the understanding of the relationships among all of the participants in the project.

The project sponsors who work with UNICEF Slovenia to improve the situation with regard to peer violence presented key messages and important guidelines for conflict situation at today’s press conference. Katarina Klemenc Dinjaški, Head of Corporate Communications at Lek, told parents how they should respond: “It is important that parents who hear about violence come to school and look for solutions together with teachers and students, and not to look for the guilty party as happens all too often”. Barbara Stegel, MA, Head of Public Relations for the Mercator d.d. Business System, stated that “Teachers do not have any simple recipe for preventing violence among children, so it is important that they try to find the most diverse methods for effectively preventing violence. It is important that the teachers do not lose faith, and that everyone, the entire community and society, takes part in preventing all forms of violence among children. We have to be allies and work together for the good of the children.” Samo Lesar and Andreja Koler Križe of the Zaletalnica Society, which conducts workshops at the schools, noted that students who are not accepted by their peers often develop a poor self-image. “Therefore it is extremely important for students who are teased by their schoolmates to know that this does not mean that there is something wrong with them. At the same time they also have to talk to someone about it and they have to know that they are not a crybaby if they talk about violence…”

The project is also supported by the National Education Institute, the City Municipality of Ljubljana and the FIHO Foundation, who will be joined by McDonalds in the coming school year.

The objective of the SPEAK UP! Let’s Talk about Violence among Children. For Safe Schools project is to raise awareness and empower children and youth with regard to the unacceptability of peer violence, and also to raise awareness about the problem among adults, from whom this form of violence is often concealed.

The project is carried out via various activities throughout the year. At the beginning and end of the school year the students and school employees complete questionnaires about their awareness of violence at school. All the employees, parents and students receive educational materials (manuals) in order to facilitate the educational workshops. External associates from the Zaletalnica Society run the workshops at the schools for all employees, and they place a special emphasis on training classroom teachers, who then hold workshops with the students during class. All of the classes adopt their own internal rules of conduct, and the entire school also adopts school rules. Another important element within the framework of the project is the “safety net”, which is developed in a slightly different form at every school. The purpose of the safety net is to establish a system which allows the children at the school to report incidents of peer violence that they witness or are themselves the victims of. For children who require additional encouragement in order to talk about it, there is an anonymous system of reporting through “trust booths” and asking questions over the Internet. One very effective method in the safety net is so-called mentorship, where each older student takes care of a younger student and assists them if they need help. Also important are other activities within the safety net in which the students get to know their teachers and form positive relationships, which allows them to solve problems more easily. This is done through sports, social games during recess etc. Working with the parents is another important element of the safety net and includes round-table discussions for parents, joint field trips, sports activities for parents and students and many other activities. 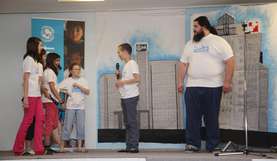 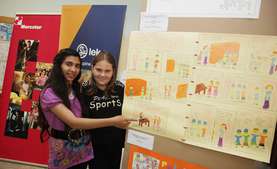 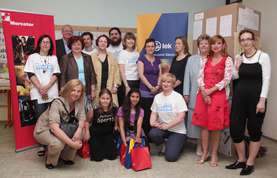