Together we'll speak up about child violence

Children presented protective networks as a part of the "Speak up!" project Let's Talk about Violence among Children. For a Safe School.

The project entitled Speak Up! Let’s Talk about Violence among Children. For a Safe School. has already been running for three years and involves 11 elementary schools. The schools have set up protective networks that form a part of the project endeavors. For the second year running, its implementation has been taken on by the pharmaceutical company Lek, a member of the Sandoz group.

Pupils of the elementary schools participating in the UNICEF project Speak Up! Let’s Talk about Violence among Children. For a Safe School. today presented their views on violence among peer groups, how they confront it and what has changed in their schools since their integration in the mentioned project. They have set up protective networks which form a part of the project activities. As the body carrying out the project, UNICEF Slovenia in collaboration with the Zaletalnica Society, which runs the project in schools, and the main sponsor, Lek Pharmaceuticals, a member of the Sandoz group, presented the results of successful project implementation in which now, after just three years, 11 elementary schools are involved.

With the aim of bringing attention to the problem of peer violence in schools, in 2006 UNICEF Slovenia began to implement the support group project Speak Up! Let’s Talk about Violence among Children. For a Safe School. which debates the issue of violence among children. Violence among child peer groups is a serious problem to which we must not turn a blind eye. That is why the project is focused on informing children and adults about what violence is, that violence in any form is unacceptable, and on the methods used to successfully prevent violence or how to confront it. The emphasis is on the collaboration of pupils, parents, school staff and local communities. To date, 11 elementary schools in Slovenia have been integrated in the project.

The results are encouraging and reveal that teachers are more attentive to the phenomenon of violence among children in schools and intervene more often and also more effectively in individual cases, as the pupils themselves have noticed: “The range of activities that have enabled this are the protective networks. Schools utilize them with the aim of speaking more on the issue of peer group violence, and fostering relations among staff and pupils. This is in fact one of the methods pupils use to relate more easily if they experience violence among their peers,” emphasizes Samo Lesar from Zaletalnica.

The protective network consists of four areas that involve school staff and are run by them:

The goals of the protective networks are to link and improve relations among pupils, parents and school employees through various activities, which assists them in building trust and finding it easier to speak up if there is violent behavior among peers. Furthermore, through these diverse activities, an awareness is spreading that violence among peers exists as do the solutions for its prevention or rescue. “The protective networks system enables the problems associated with peer violence to be used as a topic for various activities at school. The more that is spoken and thought about, the greater the probability that the person who is the victim of violence realizes that it is not something to be ashamed of and unchangeable, but that it can be changed, and that has already happened to almost half the pupils at school,” explains Samo Lesar from Zaletalnica.

With UNICEF Slovenia and the Zaletalnica Society, the project partners are endeavoring to make an improvement in the state of this burning issue. These include Lek Pharmceuticals, a member of the Sandoz group, partner and general sponsor of the association UNICEF Slovenia for more than 10 years and at the same time main sponsor of the project Speak Up! Let’s Talk about Violence among Children. For a Safe School. The company also provided all the resources to implement the project at Spodnja Šiška elementary school. Marjan Novak, member of the Lek Board of Directors, added: “Lek, a member of the Sandoz group, has been collaborating in the Speak Up! project since 2007. That was when elementary school pupils first showed us how the first year of Speak Up! ran at their schools, what they learned, how they started talking about peer violence and what has improved in one year. Since then, we have observed that new schools are joining the project. At present there are 10, and in total 11 are involved. This is very encouraging as peer violence among children is an issue that is, unfortunately, a part of our daily lives nowadays, yet it often remains hidden from adult eyes. At Lek we have therefore joined the UNICEF project to prevent peer violence with a great sense of responsibility and an awareness of the importance of solving this problem. The most important thing is actually for everybody to start talking about this subject. This is the first step towards solving problems that are usually more difficult.”

“Our children are not fighting for survival like children in many countries of the world, but their world does not suit their needs. They face a phenomenon that threatens their childhood, growing up and development, which is why we must provide an appropriate response to it”, emphasized Zora Tomič, predsident of UNICEF Slovenia. With the project Speak Up! Let’s Talk about Violence among Children. For a Safe School. UNICEF Slovenia has demonstrated its role as a supporter of children’s rights in Slovenia and is working to the benefit of Slovene children – not only its international mission. Grateful acknowledgement is made to the company Mercator d.d, Ministry of Education and Sport, Ministry of Higher Education, Science and Technology of the Republic of Slovenia, Ljubljana city council and Nova Gorica town council who have made a significant contribution to the project implementation. 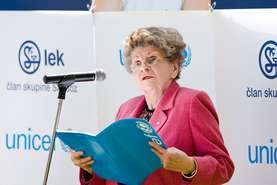 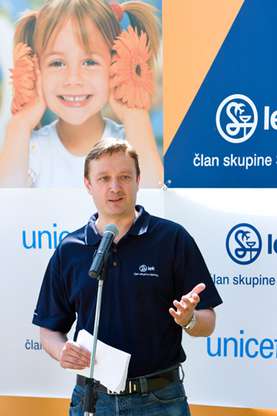 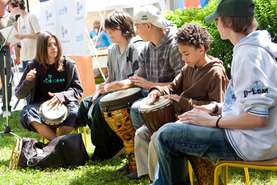 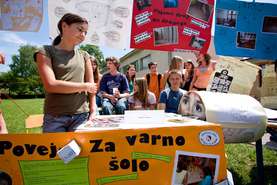