Top companies for a successful way out of the crisis

On Tuesday, March 3, the University of Ljubljana and several of the most successful Slovenian companies, including Lek, signed agreements on strategic partnership in the field of solving the current development issues of the economy and society. In doing so, the signatories wished to give a clear signal that they are prepared to and capable of using their combined strengths to take advantage of the opportunities presented by the economic crisis.

The University of Ljubljana was joined in partnership by Lek, Gorenje, Krka, Iskratel, BTC, Oria Computers, Sava, Kolektor and Mercator, and negotiations are underway with various other companies. An agreement on strategic partnership in the field of solving the current development issues of the economy and society was signed on behalf of Lek by Member of the Lek Board of Management and Head of Human Resources Darija Brečevič.

According to University of Ljubljana Rector Andreja Kocijančič, these signings are a major and important event, as they mean that the university and the companies are responding to the economic crisis with a clear preparedness to join forces to help develop knowledge so that Slovenia emerges from the crisis a winner. According to Kocijančič, the University is fully aware that academic knowledge is not enough and that cooperation with industry is required for advances in development. If there have been some justifiable complaints that such connections have not been sufficiently effective in the past, she believes that the current crisis has finally forced the University into full cooperation with industry.

The University and industry already have numerous experiences with cooperation, and now they hope that with a concrete selection of highly promising projects of cooperation between the University and the individual companies, they will give a clear signal to everyone, particularly the Government, that they have the will, expertise and concrete projects to find a way out of the crisis. 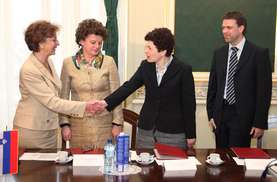