Lek d.d. (Lek) operated in 2007 in accordance with its business guidelines. Sandoz, of which Lek is a part, recorded sales of USD 7 169 m, which is 20% higher than the previous year (13% growth in local currency).

Lek is one of the pillars of Sandoz operations, and contributes to its success through all business processes. It operates (1) as a global development center for products and technologies, (2) as a global manufacturing center for active pharmaceutical ingredients and medicines, (3) as a competence center for the development of vertically integrated products, (4) as one of six Novartis biopharmaceutical centers, and (5) as a supply center for the markets of CEE, SEE and CIS. Also, Lek’s expertise in the field of OTC is gaining a strategic role within Sandoz.

Lek’s expertise contributes to the development of biosimilars

In October 2007 Lek opened the new Biopharmaceuticals Development Center, which is one of six biopharmaceuticals centers at Novartis. It will help consolidate Lek and Sandoz’s position in biopharmaceuticals, and Lek’s expertise will contribute to developing new biosimilars for Sandoz global markets, including the Slovene market. To date, Lek has invested nearly 40 million euros in biopharmaceuticals, of which the investment in the first stage of the Development Center in Menges was valued at nearly 7 million euros, while in the future Lek will continue to invest in laboratory equipment in order to upgrade its pilot development capacities. The new development center creates new job opportunities for leading experts. 100 Lek associates in the fields of microbiology, biology, biochemistry, chemistry, pharmacy and other sciences work on the development of biosimilars, and their expertise will make a crucial contribution to the development of these drugs for Sandoz global markets.

In the most important and largest part of the production in Slovenia, namely the manufacturing of pharmaceutical products, we hit an all-time record. The highest growth in production was recorded at the Ljubljana site (production of solid dosage forms), at 26%, and the Prevalje site (production of antiinfectives), 23%.

At the beginning of December 2007 Lek Prevalje manufactured the 100,000th pallet of its leading product, a broad-spectrum antibiotic, which is a combination of amoxicillin and clavulanic acid intended for the treatment of various infections. This is a significant milestone for all of Lek, and especially for its manufacturing plant in Prevalje and its employees.

Following the organization and strategic guidelines of Sandoz, in 2007 we increased sales to other Sandoz companies, which market the products in their respective markets.

Lek’s key markets in 2007 were the Russian Federation, Poland, Slovenia and the USA. As a part of a global company Lek markets its own products as well as the products of other companies within Sandoz. In 2007 we decreased sales of some products from other Sandoz companies to the US market, which now ranks this market in fourth place among our key markets. In other regions we posted sales growth, except on the domestic Slovenian market, where we faced a further decrease in prices. In the Russian Federation we recorded sales growth rates of 29.9 percent, and growth in the CEE region was 14%.

Lek once again recorded the majority of its sales in pharmaceutical products (prescription medicines), and achieved the highest growth rate with its OTC products. In Slovenia, Lek is the market leader in the OTC segment, and has increased its market share to 23.7%.

The leading product in 2007 was once again the antibiotic Amoxiclav, followed by Omeprazole, Ketonal and Linex.

One third of all Sandoz R&D projects is comming from Slovenia.

The importance of Lek researchers to Novartis was acknowledged with a VIVA award – a Novartis award for outstanding scientific achievements – which in 2007 was given to Lek employee Dr. Janez Kerč, together with only three other scientists from Sandoz.

In 2007 we were also successful in the field of intellectual property, where we successfully concluded an important patent lawsuit.

In 2007 we continued with the investment in the enlargement of production capacities at the Ljubljana site. The value of the project, which will increase production to 5 bn final dosage forms per year, amounts to EUR 11.7 m. The project is running on time.

In 2007 we invested in modernization and enlargement of production capacity, as well as in process improvement at the production sites in Lendava, Prevalje and Menges.

In 2007 we also invested in the construction of a new quality control center at the Ljubljana site. Sandoz investment is important because it will provide Lek with laboratory capacities for the quality control of products which are marketed in the EU and which come from non-EU countries, as well as for Lek products globally.

The new center will provide laboratory capacities which will facilitate increased production of final dosage forms and sterile pharmaceutical products, and it will house a contemporary microbiological laboratory which is up-to-date with the latest global guidelines. One part of the new quality control center began operating at the beginning of this year, and the other part will be finalized by mid 2008.

In 2007 we began building a new kindergarten at the Ljubljana site. The building, which will be constructed according to the highest standards of child care and education, will be operational in the first quarter of 2008.

In line with Novartis and Sandoz strategic guidelines regarding the unification of the business information system in the Sandoz global organization, Lek was chosen to host the pilot project. In this highly demanding and important project within Sandoz, Lek played a crucial role. With Lek’s own expertise and supported with experienced consultants the project was concluded on time. Lek entered 2008 with the new business information system, which is one of the most challenging fields of information support for business in a global organization.

In 2007 Lek was among the companies which received the Family Friendly Certificate. This project was a challenge through which we wanted to revise the existing benefits for employees (kindergarten in Ljubljana, holiday facilities, New Year’s gifts for children of the employees, annual social gathering of the employees, family bicycle marathon, annual meeting of Lek retirees, etc.) and look for new ones (delayed arrival for employees with small children, child care during holidays, etc.). Through all these steps we are trying to help our employees combine work and family in today’s fast-living world.

On the occasion of the first European Data Protection Day, on January 29th the Information Commissioner prepared a public panel at the Faculty of Law and awarded prizes for good practice in the protection of personal data. Lek was the only company in the private sector to receive one, while the Slovenj Gradec General Hospital received the public sector award. We hold regular training sessions for employees regarding this issue, so that they know what their rights and obligations are.

Lek is among the top 10 Slovenian companies in taking care of the personal development, knowledge and training of its employees. In 2007 we invested EUR 4.7 m in this field. In 2007 Lek was ranked among the top 10 employers in Slovenia, which was announced at the job fair Career/07. The most distinguished employers were chosen on the basis of a survey about the reputation of the employers, which included 285 Slovenian companies, which was carried out for nine months in order to identify the best employer to work for and included almost 9,000 candidates from the working population in Slovenia. For years we have been promoting the practice of equal employment opportunities at Lek. We employ on the basis of knowledge and expertise, regardless of sex, age, creed, racial or ethnic background. In 1999 Lek received the Women Friendly Company award. In 2007 Lek had 47% female and 53% male employees. Among top management there are more women than men, and the number of women and men on the Board of Management is the same.

The number of employees at Lek grew in 2007, despite the fact that high labor costs in Slovenia decrease our competitiveness on the global level.

*All data published in this press release are preliminary, unaudited and according to Slovenian Accounting Standards.

Lek, a Sandoz company, is one of the pillars of leading world generics company Sandoz. It operates as a global development center for products and technologies, as a global manufacturing center for active pharmaceutical ingredients and medicines, as a competence center for the development of vertically integrated products, as a Sandoz competence center in the field of development and manufacturing of biosimilar products and as a supply center for the markets of CEE, SEE and CIS, sales Slovenia and sales services for Sandoz’s global markets. Lek d.d. employs more than 3,000 people. For further information please consult http://www.lek.si

Novartis AG provides healthcare solutions that address the evolving needs of patients and societies. Focused solely on growth areas in healthcare, Novartis offers a diversified portfolio to best meet these needs: innovative medicines, cost-saving generic pharmaceuticals, preventive vaccines and diagnostic tools, and consumer health products. Novartis is the only company with leading positions in these areas. In 2007, the Group’s continuing operations (excluding divestments in 2007) achieved net sales of USD 38.1 billion and net income of USD 6.5 billion. Approximately USD 6.4 billion was invested in R&D activities throughout
the Group. Headquartered in Basel, Switzerland, Novartis Group companies employ approximately 98,200 full-time associates and operate in over 140 countries around the world. For more information, please visit http://www.novartis.com. 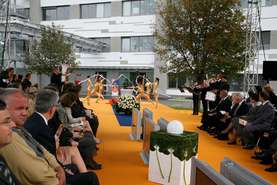 Photo for print
Opening of Biopharmaceuticals Development Center in Menges 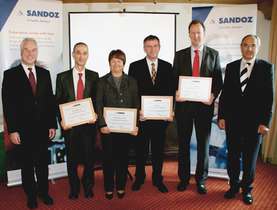 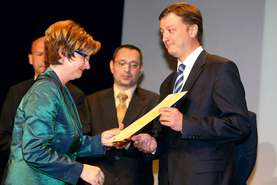