The first year of project &#8216;SPEAK UP! Let's Start Talking about Violence Among Children' has brought positive results – Children want to talk about and prevent violence, but need the support of school staff, parents and the wider environment – Seven primary schools participating in this school year

Ljubljana, October 17 – At a press conference today, UNICEF Slovenia in cooperation with the Zaletalnica Society presented the results of the implementation of the project ‘SPEAK UP! Let’s Start Talking about Violence Among Children’ over the past school year. Together with the project partner, Lek Pharmaceuticals, they presented the expansion of the project this school year to four additional primary schools. Students from the primary schools already included in the project took the role of speakers, and presented their experiences with the project at their school, how well they succeeded in initiating discussions of interpeer violence and what they managed to change in one school year. Together with President of UNICEF Slovenia Zora Tomič and Lek Pharmaceuticals, they encouraged their peers who are joining the initiative this year work to create a safe and pleasant environment in our primary schools.

In order to emphasize the problem of interpeer violence in schools, in 2006 UNICEF Slovenia began implementing an advocacy project called ‘SPEAK UP! Let’s Start Talking about Violence Among Children’. Violence among peers is a serious problem which we cannot ignore. Therefore the project is oriented towards telling children and adults what violence is, that violence is not acceptable in any form and about methods through which violence can be successfully prevented or dealt with. The emphasis is primarily on the cooperation of students, parents, school staff and the local communities. In Slovenia the project is led and coordinated by UNICEF Slovenia together with the Zaletalnica Society, which carries out the program at the schools. During the last school year the project was begun at three primary schools: Šentvid primary school and Kette and Murn primary school in Ljubljana and Prežihov Voranc primary school in Maribor.

The results of the first year of the project are encouraging, as they indicate that teachers are more aware of the appearance of interpeer violence at school, and take more frequent and more effective measures in individual cases. The students have also noticed that the teachers recognize and prevent violence among their peers more often. More than two thirds of the students would talk to an adult if they see or participate in a case of interpeer violence. It is significant that substantially more students at these schools are now prepared to help their peers and interfere in order to prevent interpeer violence. As part of the project, UNICEF Slovenia published two guides – a guide for parents and a guide for students, which were extremely well received among students, teachers and parents mainly on account of their usefulness. The parents were also happy with the workshops on parenting styles, which were designed for them as part of the project. All of this provided the incentive to expand the project to other primary schools. This school year the project will also include Spodnja Šiška primary school and Koseze primary school in Ljubljana, Fran Erjavec primary school and Milojka Štrukelj primary school in Nova Gorica, for a total of seven schools.

The existence and expansion of the project, which is intended to improve conditions in this critical area, could not happen without its sponsors, who work together with UNICEF Slovenia and the Zaletalnica Society to allow children to grow up in a safer and more pleasant environment. Therefore at the press conference special thanks were given to Lek, a Sandoz company, the long-term general sponsor of UNICEF Slovenia and the main sponsor of the ‘SPEAK UP! Let’s Start Talking about Violence Among Children’ project, which also provided all of the funds for the implementation of the project at Spodnja Šiška primary school. “Interpeer violence among children is a problem which is unfortunately a part of our times and occurs both in schools and on the streets, but remains mostly hidden from the eyes of adults. Therefore it is all the more important that everyone start talking about it. This is the first step on the path to solving the problem, which is usually the most difficult one. Therefore it is essential that children and the adults who they are close to get to know their counselors, with whom they can talk about their problems. It is important to eliminate the fear of spoken words. Once they have begun to speak, our task is to be there for them. Therefore, with a great deal of responsibility and awareness of the importance of solving this problem, we at Lek have joined UNICEF’s project ‘SPEAK UP! Let’s Start Talking about Violence Among Children’. We believe that together we can contribute to improving the situation in this area,” said member of the Lek Board of Management Marjan Novak.

We would also like to thank the Ministry of Education and Sport, the Ministry of Labour, Family and Social Affairs, The National Education Institute and the City Municipality of Nova Gorica, which have made significant contributions to the implementation of this project.

“At UNICEF we believe that each child should be protected against violence, abuse, neglect and exploitation, and therefore we try to form partnerships through which children can be specially protected. A safe environment, which we can create together with our children, means a safe and happy childhood,” said Zora Tomič, President of UNICEF Slovenia. With the project ‘SPEAK UP! Let’s Start Talking about Violence Among Children’, UNICEF Slovenia is buttressing its role as an advocate of children’s rights in Slovenia, and working for the benefit of Slovene children and not just in the interest of its international mission. 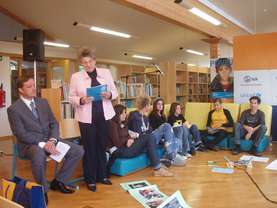 Photo for print
Zora Tomic, President of the UNICEF Slovenia 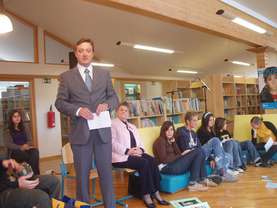 Photo for print
Mag. Marjan Novak, member of the Lek Board of Management 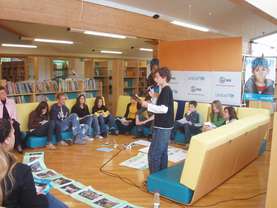 Photo for print
Children spoke about the project 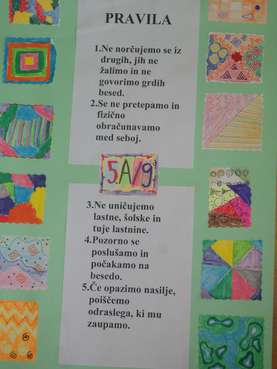 Photo for print
Rules of conduct, prepared by children